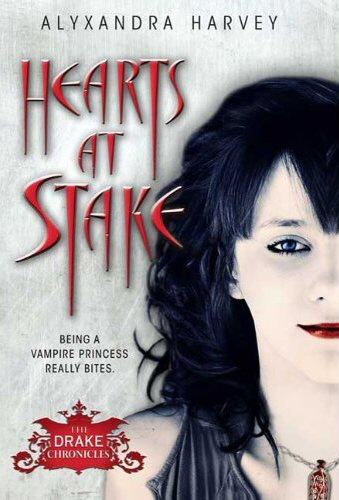 Debut author Alyxandra Harvey’s Hearts at Stake is the first of a series of books about the Drakes, a charismatic, sexy and morally upright (they don’t feed on humans) family of vampires whose children are born mortal and turn into vampires when they reach the age of 16.  This first installment focuses on 15 year old Solange, the beautiful Drake daughter whose birth has been prophesied to upset the whole vampire world, and her best friend, Lucy, a spunky tough mortal teen who tries hard to help her friend lead a normal life.  When Solange is kidnapped, Lucy joins forces with the Drake brothers (including gorgeous brother Nicholas) and Solange’s fierce-some parents to track her down and save her from being destroyed by either: the terrible changes her body will endure as she stops being human; the threat of the Helios-Ra, a secret society of vampire hunters; the current reigning Queen of the Vampires whose position is threatened by Solange’s very existence; the myriad of vampires who want to take her for their own; or the possibility of falling for a human guy who’s bent on destroying her out of revenge.

Harvey’s novel is spunky and fun, with a quickly moving plot and a clever use of dark humor.  It’s a fairly complex vampire world full of politics, intrigue and danger and there are enough members of the Drake family to create a lot of potential storylines for future installments.  Each of Lucy and Solange’s romantic storylines are both fairly predictable and Lucy and Solange’s voices intermingled into what felt like one narrative voice, but for girls looking for something that smartly combines Buffy the Vampire Slayer with the Twilight Saga, Hearts at Stake is sure to be a favorite.