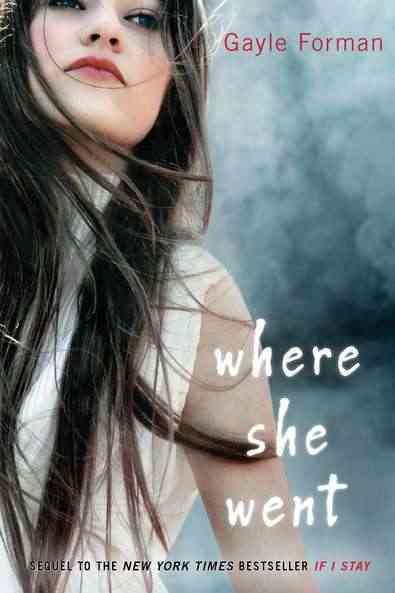 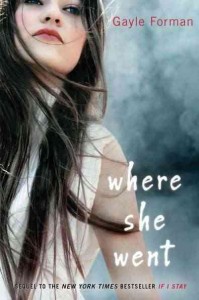 Gayle Forman’s If I Stay is an incredible book.  It’s heartbreaking, lyrical, visceral and beautiful.  I shed tears a few times while reading it. And when Mia chose to come back to a broken body, a life without her parents and beloved younger brother, to an uncertain future, but to the fierce love of her grandparents and boyfriend Adam, I rejoiced.

Next month, Dutton will release Where She Went, Forman’s sequel to If I Stay.  Three years have passed and now, and from Adam’s perspective we learn what happened to Adam and Mia.  Adam’s band, Shooting Star, has propelled him to rock star existance: he’s rich; hounded by fans, groupies, and the press; dating a gorgeous A-List Hollywood actress; on the cover of every magazine; and all the while suffering from anger, anxiety, and isolation.  Mia left Oregon for Julliard and with weeks cut Adam off without an explanation. Now she’s graduated early, is a rising star in the classical music world, and is about to embark on a world-wide music tour for young artists.  When Adam has a layover in New York before the start of the band’s next world tour, he and Mia cross paths by chance and spend a long, emotion-filled night touring the City and revisiting the love, loss, and pain of the last three years.

It feels as though a lot of care has been taken in Where She Went to rekindle the power and emotional intensity of If I Stay.  Where She Went is, however, a completely different book – the narrator, situation, time and place – and trying to recapture the magic is a tough challenge.  I’m sad to say I feel that this sequel falls short of the mark: it aims high, certainly, in examining the consequences of Adam’s plea and promise to a comatose Mia; it’s interesting to learn how Mia recovered and moved on; painful to see the damage that’s been inflicted on Adam; and haunting to get glimpses of Mia’s lost family through Adam’s fond memories; but, at the end of the day, what made If I Stay heartbreaking, thought provoking, and gripping, just can’t be replicated. While it’s true that one day can change your life forever, for me, that day happened in If I Stay.