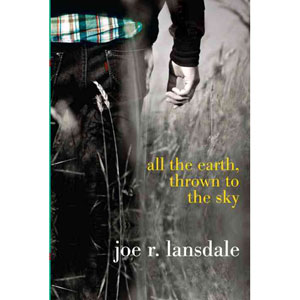 All the Earth, Thrown to the Sky

“Just about the time I was thinking things weren’t turning out so bad after all, events took a turn for the worse.”  So says Jack Catcher, teen protagonist in Joe R. Landsdale’s latest, All the Earth, Thrown to the Sky.  And this remark captures the flavor of this book, and Jack’s adventures in it, perfectly.

Set in the deepest part of the Great Depression, in the dustbowl of Oklahoma, Jack’s parents have just died – his mother from a wasting sickness and his father from grief – and now he’s not sure what to do.  He’s got no food and no money, and the bank will soon foreclose on the dust-choked homestead his family once farmed.  With nothing left to lose, Jack sets out with a former classmate – spunky, smart, and beautiful  – Jane Lewis and her little brother Tony, in a car they’ve taken from the barn of a dead neighbor, on the road to East Texas where Jane claims to have family.  Along the way, the trio runs into grasshopper storms so thick the bugs eat the clothes off their backs, two dangerous gangsters set to use them as hostages after a bank heist gone bad, a duplicitous sheriff who cons them into slave labor on his pea plantation, and all manner of colorful characters that populated 1930’s America.  It’s tough for the trio to catch a break no matter what they do, but despite every obstacle that comes at them on this road-trip, rail-riding adventure, they don’t give up and keep pushing forward, sure there’s something better just ahead.

Landsdale creates a vivid picture of the landscape, people, and hard-times of the 1930’s.  It was really easy to be drawn into Jack, Jane, and Tony’s world and get a good feel for the spirit of the time.   Jack’s perspective on their predicaments and troubles remains resolutely stoic throughout and his determination reinforces the message that by your own wits, and with a little luck and perseverance, you can get through just about anything.