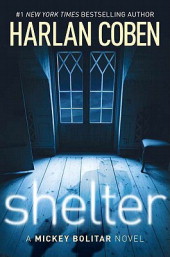 Best-Selling adult suspense author Harlan Coben makes his young adult debut with Shelter (A Mickey Bolitar Novel).  He joins plenty of other high profile adult writers venturing into the waters of children and teen lit, carrying over his signature style, plot twists and turns, and high-stakes scenarios to the next generation.  Like Kathy Reichs, Coben creates a protagonist for his new series who’s related to an already beloved character.  In this series, Mickey is reluctant detective Myron Bolitar’s estranged nephew.   Readers (especially guys) who like a lot of action, fast pacing, economical prose, and surprise plot hooks will get a thrill from Shelter and will eagerly await Mickey’s continued adventures.

15 year old Mickey Bolitar’s life has fallen apart: his dad is dead, his mom is in rehab, he’s stuck living in the basement of his uncle Myron’s house, and his new girlfriend, Ashley, has gone missing.  But Mickey’s not the kind of guy to feel sorry for himself or wallow in doubt or fear.  He’s going to figure out what happened to Ashley, following a convoluted trail that leads him into the seedy underworld of sex clubs and seedy characters.  Along the way, Mickey is accosted by a kooky old lady who tells him that his father isn’t dead, and pretty soon, Ashley’s disappearance and his parents’ former globe-trotting philanthropic work seem to be improbably linked together.  With the help of an eclectic group of new friends, Mickey delves into a shocking conspiracy that leaves him questioning everything about his life that he thought he knew.

2011-09-17
Previous Post: September Edition of Our Newsletter is Out Now!
Next Post: Raising a Reader – On a Mission to Change the World