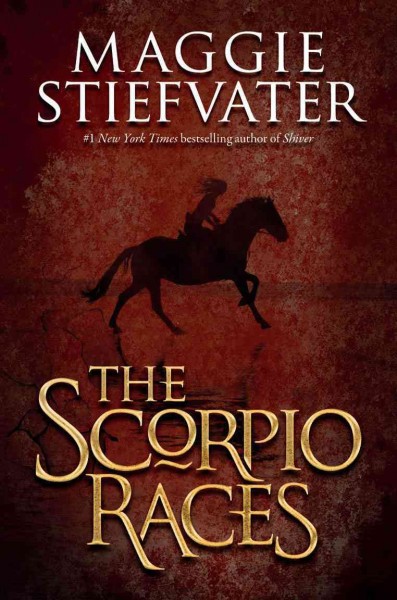 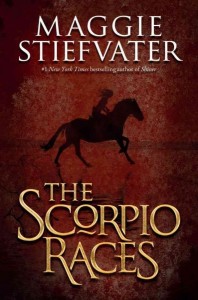 New York Times bestselling author Maggie Stiefvater has created something wonderful, enchanting, thrilling, and unique in her latest, The Scorpio Races.  It’s hard to say what I like most about this book – its breathtaking scenery and visceral sense of place; the pulse-pounding thrill of the wild horses racing on the beach; the lovingly crafted, superbly detailed characters (human and horse); the fact that it’s a unique blend of romance, action, coming of age, and fantasy that feels so different from most everything else out on the YA market right now; or maybe, simply, the powerful honesty of a book well written, carefully edited, and lovingly (almost fiercely) thrust out into the world on its own terms.

Thisby is a hard-scrabble island, wind swept, beaten by the North Atlantic, home to a small collection of hardy, stubborn people. Thisby is also a magical place, full of danger and menace, for only there and only in Autumn, the sea brings the capaill uisce– the water horses of Celtic legend – up onto Thisby’s shores.  They are savage, wild from the sea with the cunning and power of sharks, mad with hunger, coursing with powerful magic, and if caught, faster than any creature on land. So the people of Thisby have lived for generations with the threat of and love for the capaill uisce, capturing them, “taming” them, and then, each year on November First, when their madness for the call of sea is the greatest, racing them on the beach in the Scorpio Races.

Sean Kendrick, an orphan since the age of 9 when his father was killed in the Races, has an intimate connection to the magical beasts. Four times he’s won the Races on his uisce stallion, Corr, and he has a “way” with all the capaill uisce and with horses in general.   Most on Thisby believe Sean hears the call of the sea and that its magic flows in his veins.  But Sean is beholden to the most powerful man on the island who owns Corr and thus Sean’s heart.  Puck (Kate) Connolly, orphaned when her parents were killed by capaill uisce last year, finds that it must fall to her to find some way to save her family farm and keep her brothers together.  Rashly, Kate decides that if she could win the Races on her beloved island pony, Dove, the purse would save the farm and what’s left of her family.  But many on the island don’t believe there’s room in the race for anything other than capaill uisce , most certainly not a woman.

Sean and Kate are an unlikely pair, thrown together – eventually drawn together – by their similarities, circumstances, and love for Thisby and their horses.  What they warily come to realize in the days leading up to the Race is that they complete each other.  Like the sea needs the island, one cannot exist without the other, and together, there is magic.