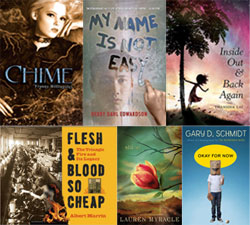 The finalists for the 2011 National Book Award in Young People’s Literature were announced on Wednesday. The nominees are: Franny Billingsley, Chime, edited by Kathy Dawson (Dial), Debby Dahl Edwardson, My Name Is Not Easy, edited by Melanie Kroupa (Marshall Cavendish); Thanhha Lai, Inside Out and Back Again, edited by Tara Weikum (Harper); Albert Marrin, Flesh & Blood So Cheap: The Triangle Fire and Its Legacy, edited by Michelle Frey (Knopf); Lauren Myracle, Shine, edited by Susan Van Metre (Abrams/Amulet); and Gary D. Schmidt, Okay for Now, edited by Virginia Buckley (Clarion).

The winner will be announced on November 16 at the National Book Awards ceremony in New York City, which will be hosted by John Lithgow.

In an unprecedented move, best-selling author Lauren Myracle withdrew her name yesterday as one of the finalists of the 2011 National Book Awards for Young People’s Literature after the award sponsor admitted to making a clerical mistake that led to her nomination.

“I was over the moon last week after receiving the call telling me that Shine (Amulet, 2011) was a finalist for the award,” says Myracle (left), referring to her much-praised gritty novel, which involves a brutal hate crime, poverty, and drugs. “I was later informed that Shine had been included in error, but would remain on the list based on its merits. However, on Friday I was asked to withdraw by the National Book Foundation to preserve the integrity of the award and the judges’ work, and I have agreed to do so.”

Read the rest of the School Library Journal article HERE