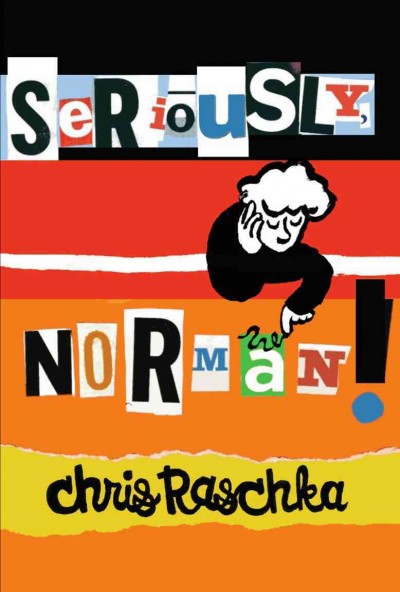 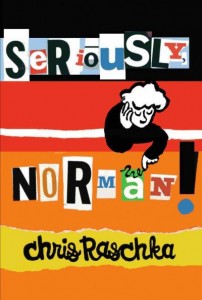 Seriously, this book tries too hard.

It tries to be quirky, it tries to be funny, it tries to connect to 10-14 year old boys who liked Lemony Snicket, play lots of video games, and love karate, it tries to be a vocabulary builder, and it tries to teach the reader about imagination, courage, and thinking outside the box.  In the end it succeeded in making me skim read to the end to find out what happened, and then say incredulously, “seriously?”

Perhaps I’m being too harsh.  Chris Raschka is a Caldecott medalist after all.  And there are some funny moments and some curious characters and situations in Seriously, Norman, Raschka’s fiction debut.  But hanging out with Norman and his best pal Leonard and the twins, Anna and Emma, and their nutty tutor Balthazar Birdsong got a little old a little too quickly.  Norman is just a regular kid who doesn’t try too hard in school and doesn’t seem to expect much from middle school.  When he fails his standardized tests, his oddball parents hire a wacky tutor who assigns Norman tasks like reading the dictionary, observing clouds, and exercising his imagination.  Norman uses his new-found curiosity to wonder about what his money-obsessed father does for a living, eventually realizing he sells bombers to shady warlords and other Third World despots.  When his father goes missing, the kids set out on a globe-trotting adventure to rescue him.

Norman’s lesson is to use imagination and observation in the proper proportions to change the world. In the end, he changes his outlook, his family, and his fear of standardized tests, so I guess you could say he learned the lesson well.