We’re giving away a Zero ARC and a Destined ARC! 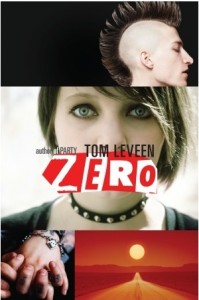 Learn More About the Books:

Zero by Tom Leveen: For aspiring artist Amanda Walsh, who only half-jokingly goes by the nickname Zero, the summer before college was supposed to be fun—plain and simple. Hanging out with her best friend Jenn, going to clubs, painting, and counting down the days until her escape. But when must-have scholarship money doesn’t materialize, and she has a falling out with Jenn that can only be described as majorly awkward, and Zero’s parents relationship goes from tense to relentless fighting, her prospects start looking as bleak and surreal as a painting by her idol Salvador Dali. Will life truly imitate art? Will her new, unexpected relationship with a punk skater boy who seems too good to be real and support from the unlikeliest of sources show Zero that she’s so much more than a name.

Written by Tom Leveen, Zero is his second YA novel. His first book, Party, came out last fall. He has been involved in theater since 1988, directing over 30 plays. As the artistic director and a co-founder of an all-ages, nonprofit visual and performing venue in Scottsdale, Arizona, he frequently works with young adults at various events including theater, visual art exhibits, and especially the live music scene. Tom is an Arizona native, where he lives with his wife, Joy. You can visit Tom at TomLeveen.com. 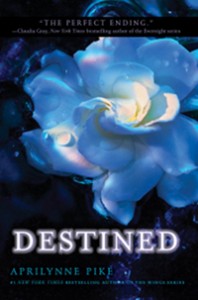 Destined by Aprilynne Pike: In Destined,the New York Times bestselling Wingsseries comes to an explosive conclusion, bringing to a close the story of a not-so-ordinary girl named Laurel. Laurel now knows the truth: Yuki is a rare Winter faerie, the most powerful–and deadly–of all, and Klea plans to use her to help conquer or destroy Avalon. But Klea’s reach extends far beyond one wild Winter faerie. With Tamani, David, and Chelsea by her side, Laurel prepares to face what may be Avalon’s final days.

Written by Aprilynne Pike, who has been spinning tales since she was a child with a hyper-active imagination. At the age of twenty she received her BA in Creative Writing from Lewis-Clark State College in Lewiston, Idaho. When not writing, Aprilynne can usually be found out running; she also enjoys singing, acting, reading, and working with pregnant moms as a childbirth educator and doula. Aprilynne lives in Arizona with her husband and four kids; she is enjoying the sunshine. You can visit her at aprilynnepike.com.

**This giveaway is now closed. The lucky winners were Cyra S. and Brandy W. Thanks for Entering!!**