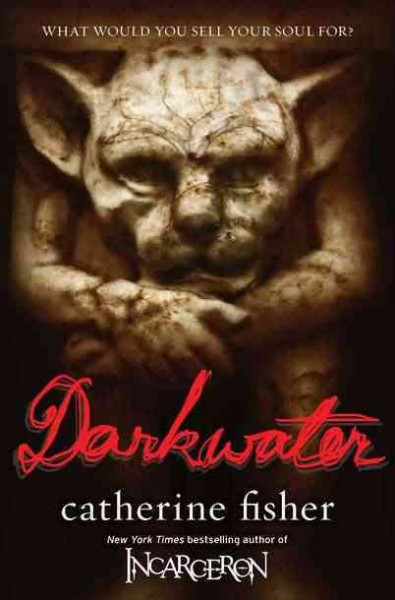 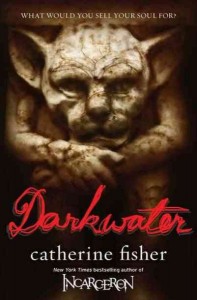 Acclaimed British novelist Catherine Fisher (Incarceron – The Times’ Children’s Book of the Year) is back this Fall with a new subtly woven, spooky Faust-inspired, fantasy, Darkwater.

In the early twentieth century in a windswept British village on the sea, 16 year old Sarah Trevelyan would give anything to regain the power, prestige, and wealth her family held for generations but lost in the folly of a card game gone wrong.  Reduced to living with her family’s only remaining loyal servant, Sarah’s sickly and broken father sinks deeper into a wasting illness while she is forced to humble herself as a scullery maid at the local grammar school.  When her pride and self-worth are challenged for the last time, Sarah leaves her job, unwilling to bow down any longer to the shame of her family’s lowly state.   Seemingly more than coincidence in timing, the new lord of the Trevelyan family estate, Darkwater, Azrael, offers Sarah a job as his assistant, cataloging his library and aiding in his secretive alchemy experiments.  But there is something dark and menacing behind Azrael and his wealth; and his repeated attempts to draw Sarah in to a bargain, a mere “game of chance”, if you will, gnaw at her pride and her burning need to set things right and regain what is rightfully hers.

One hundred years later, Darkwater Hall is now a private school, offering a tuition free education to any local student wishing to make more of his or her life.  But for 15 year old Tom, who yearns to attend the prestigious school but believes that he lacks the talent and merit to apply, admission remains beyond his reach.  Bullied by the local boys in town and kept company only by the spirit of his deceased twin brother, Simon, Tom sees no hope for himself or his future prospects.  His mother, the cleaning lady at the school, refers Tom to the school’s new chemistry teacher, Professor Azrael, so Tom can perhaps be his assistant; and thus a new “game of chance” begins as Azrael offers Tom a chance at his heart’s deepest desires.

Fisher deftly blends together a wide array of elements in Darkwater: from fantasy and horror to historical fiction; the Faust archetype; hints at an otherworldly war between Heaven and Hell; and a coming of age story where 2 young people are faced with lives and situations that seem hopeless beyond their means to change or escape.  It’s unclear if Darkwater is meant to be the first in a series or a stand alone book; certainly there are a number of unanswered questions that could be answered a sequel, but it’s also kind of nice to dabble in the dark and make it out alive without having every last question tied up in a neat little bow.