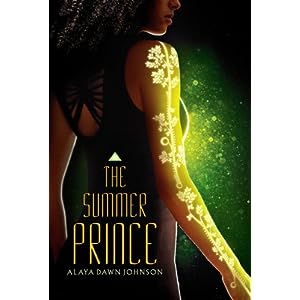 Readers of science fiction or dystopian literature like Suzanne Collins’ The Hunger Games trilogy will likely find fascination in Alaya Dawn Johnson’s inaugural young adult novel, The Summer Prince.  For her story’s setting, Johnson has created Palmares Três, a dream city which rose from the ruins of a world ravaged by plague, war, and destruction.  The city is governed mostly by women since men have done so much to destroy the world with their war games and power plays.  To keep the world from ever dying again, the Queen of Palmares Três creates a composite of the best that the previous world had to offer, but readers wonder if this utopian vision reflects improvement, whether the sacrifices are worth the gains.

An ultra-updated version of Aldous Huxley’s classic Brave New World, Palmares Três society is designed in a tiered fashion, with those living at the base of the pyramid working for the betterment or luxury of those in the upper tiers.  Although the base communities live in the verde, which is green and alive, the poor grow up here to the ever-present stink of hydrogen-producing algae.  In this remade future world—an Afro-Brazilian culture with hints of Japan, North America, and West Africa that reflects the multicultural mix Johnson imagines—society is mostly divided by age: wakas under thirty and grandes, who—because of anti-aging treatments and life-extension technology—live to be centenarians.

Told not in chapters but in seasons, Johnson spins the story of three wakas: June, the self-proclaimed “best artist in Palmares Três”; Gil, a dancer; and Enki, the summer king who must die in a public sacrificial ceremony after reigning for a year and naming the next queen.  Citizens of Palmares Três believe this sacrifice is essential to maintain their social and political stability.

Johnson’s teen trio becomes a sensation in the city, a force to be reckoned with when they use art during royal election year as a way to subvert the government while simultaneously triumphing within its rules.  For June, art is “the construction of emotional states and the evocation of suppressed feelings” (33).  Beyond painting or sculpting or seeing the world in colors, art is manipulation.  It is expressing the self on objects and using objects to express the self.  It even means using the body as a canvas, something achievable in this science fiction society because of biological modifications (biomods)—self-selected modifications like signature body art, enhanced hearing, and other forms of augmentation.  In Palmares Três, biomods can even erase hate, but the extension results in an amputation, a compromise of other human emotions.

The war between the wakas and the grandes isn’t “a repeat of that endless struggle between virility and senescence, between spontaneity and care, between creativity and knowledge” (59); it’s more about unrecognized talent and maturity, about how sometimes we watch but see nothing.  When she is nominated for the Queen’s Award, June decides to break boundaries and to create the grandest art show ever.  Although June believes “transgression is part of what makes art work,” she is afraid the grandes will perceive her art as “a prank at best, petty vandalism at worst” (90).

Conflict also revolves around the technopiles and the isolationists, warring factions who disagree about placing limits on technology.  Questions abound on this topic: Can you tell war tech not to kill? Will a trickle become a flood? Is it futile to fight against the tide of the future?  What does technology extend and what does it make obsolete?

With these questions, Johnson intentionally or unintentionally alludes to Marshall McLuhan, who is considered by many to be the first father and leading prophet of the electronic age.  McLuhan spent his career attempting to understand and explain the effects of technology as it relates to popular culture.  Mankind has always been fascinated and obsessed with the extensions technology provides, but too frequently we choose to ignore or minimize the amputations.  Flooded by technology and enjoying the luxuries it provides, we have lost our fear; we have forgotten stories like Ray Bradbury’s (1951) “The Veldt,” which warns that “Happylife Home” with its superfluous technological gadgetry can kill us.  Johnson’s story reminds us what happens to human societies when they don’t put limits on technology.

As the tale unfolds, readers watch June struggle and grow.  Unable to heal from her father’s death, which she blames on both her mother and herself, June holds her self responsible for not being good enough to bring her father’s lost music—his art—back. In the maturation process, June not only discovers her true self and finds love but learns there is more than one way to fix a tear.  She also recants her earlier proclamation that “maybe it’s better to let bad things happen than tear yourself apart trying to stop the inevitable” (196).  A true social activist, June grows tired of hurting people just because she can and of merely playing at being radical; she learns the true power of art and the true meaning of life.