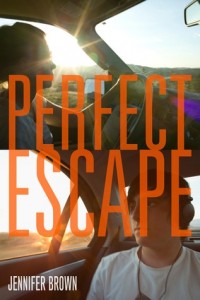 What would you do if you had a problem so large, so immensely and terrible, you just couldn’t bring yourself to face it? Would you want run away from it or deal with it head on? Kendra is in deep trouble and she is anxiously pinioned, unable to decide whether to fight or fly. She’s been cheating for months and someone has finally caught her. She panics, just as her older brother, Grayson, is returning home from rehabilitation. In her despair, she superimposes her problems onto him, believing she can somehow ameliorate her situation by fixing her brother’s obsessive compulsive behavior. With this in mind, she kidnaps the two of them, absconding west with the hopes of finding a solution to their problems in California. In her chaotic mental state, she believes that by reuniting Grayson with his lost love, she can fix his disorder and somehow improve the unpleasant situation she’s created back at home. But, as anyone can tell you, running away can never truly solve anything. Jennifer Brown reveals her heroine to be just as volatile and damaged by her role as the successful child as her brother is with his compulsion. Kendra is deeply flawed and lost and searching for answers, but also suffering from a disorder just as her brother is. She leaves in search of a simple solution, that by leaving a problem behind she can erase it. She must learn that the reality is otherwise. However, the journey also offers her a new perspective, new friends, and new insights to help her understand her mistakes; and that, ultimately, by understanding her flaws, she gains the strength to face them.

Jennifer Brown’s novel serves as the cosmic “What if?” What if when we were faced with a problem, we just ran? We left it behind and hoped that by escaping it, it would go away and leave us alone. She proves the irony of her title, Perfect Escape, in that, by leaving, her chances of escaping becomes nonexistent and her guilt is assured. So what is Jennifer Brown really getting at? Is she showing us the foolishness of such pursuits? I would argue that she is simply showing us the truth of the matter; that in even this most dire of situations, there is something to be learned. Kendra believes her brother to be the one with the flaws. He obsessively counts and has horrifying tantrums and seizures when his counting is not allowed to finish or continue. He has had to leave school and attend rehabilitation on a few different occasions. Kendra, on the other hand, is a great student and a model child. But the prevalence of mental disorders is just as likely with her as it is with her brother. She is, after all, the one who seizes the opportunity and leaves town with hardly any money or plans. It is Kendra who is subject to huge upswings of emotion, where she climbs monuments or dances or laughs energetically. It also her who becomes quickly depressed and anxious, her emotions bottoming out as she faces daunting fears and problems. By showing us her own indicative flaws in her frustrating attempt to find the root of her brother’s disorder, we begin to understand that she is really looking for the diagnosis to her own. Jennifer Brown’s novel keeps the reader hanging in the balance between these two characters, searching with Kendra for her answers, and perhaps providing us the opportunity to reflect upon ourselves and our own idiosyncrasies.

I enjoyed the psychological aspect to Brown’s novel, finding the search for a solution while the problems of her home life loomed a compelling conflict which drove the story along with some speed. I thought that the inclusion of Rena, a young mother who ran away from home when she was younger, was a particularly apt choice. She created a reflection of Kendra’s future, should she choose to always run from her problems rather than stay and solve them. Perfect Escape is a complex novel which couples the futility of escaping from what you’ve with the necessity of the Kendra’s journey in discovering more about herself and her relationship to her brother. This novel would be perfect for youth who struggle with their issues, as it provides a context for them to realize their what if. One hopes that by choosing this novel, young readers can learn to face their problems rather than run from them. Especially, if that problem is admitting a mental disorder and learning to accept and treat it.