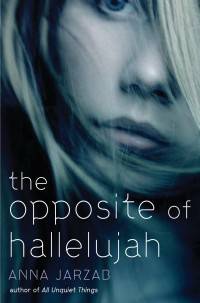 The Opposite of Hallelujah

By: Cori
In: Realistic Fiction (YA), Young Adult Book Reviews
With: 0 Comments 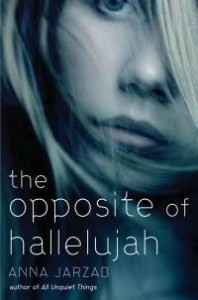 In Tne Opposite of Hallelujah, Anna Jarzab returns to the familiar territory of a mystery enveloping a dysfunctional family.  But instead of teens trying to deal with grief and solve the mystery of their friend’s death (All Unquiet Things), here we have a long-lost sister returning to a family broken by her absence and a haunting secret that threatens to resurface and wreak havoc again.

When Caro was 8, her much older sister Hannah, left home.  Too young to understand why and at a loss to explain her sister’s sudden departure to her friends and schoolmates, Caro started telling everyone that Hannah had died.  This lie quickly spiraled out of control, landing Caro in the unfortunate position of being seen by everyone she knew as a liar and a fraud.  Fast forward 8 years and at a new school with new friends, Caro sees herself as an only child; her friends today, in fact, have no idea she even has an older sister.  But when her parents, with whom Caro’s relationship remains strained, announce that Hannah is finally coming home, all the pain of Caro’s childhood comes rushing back, threatening to overwhelm her and ruin the life she’s so carefully crafted for herself.

As she envisioned, Hannah’s return to the family is uncomfortable and fraught with too many unspoken questions, resentments, and barely concealed pain.  Caro takes an indifferent at best, and outrightly antagonistic at worst, stand towards her obviously broken sister and parents and she soon alienates her boyfriend and friends by resorting to lies and obfuscation to explain the sudden appearance of a long-lost sister.  In her anger and confusion, Caro stumbles upon a series of clues about something tragic that happened to Hannah when Caro was just a baby. Determined to figure out whatever it was that so terribly damaged all their lives, Caro begins digging into the past, unraveling a tragic mystery, the resolution of which will either completely destroy the remnants of her family, or may hold the key to finally healing them.

While I found it difficult to “like” Caro, who comes off throughout the book as a selfish young woman, recognizing that her parents’ grief and inability to truly deal with Hannah’s departure left her unmoored and without any guidance or explanation, made it somewhat easier to empathize with her confusion about a past and a sister she can’t really remember.  I did enjoy the way that Jarzab introduces and then subtly weaves in the mystery from Hannah’s past, layering clues just beneath the surface and teasing them out slowly over time.   In the end, Caro, Hannah, and their parents aren’t completely healed from the past’s trauma and its lingering effects, but they’ve at least faced what happened and are talking about it it with each other, and that is the most important step to rebuilding their lives.