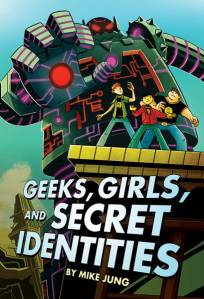 When Mike Jung was a kid, I have to believe he was like Vincent Wu, the kinda-geeky, big-hearted, superhero-crazed kid at the center of his debut novel, Geeks, Girls, and Secret Identities. Except Vincent is lucky enough to live a world that’s actually populated by real-life superheroes, maniacal evil geniuses, and giant killer robots.

Vincent and his best friends, Max and George, are the hands-down experts on Captain Stupendous, even if they don’t get any respect from the “official” Captain Stupendous fan clubs in Copperplate City.  They thought geeking out on Captain Stupendous trivia and regaling his exploits from afar would be the extent of their connection to the city’s most amazing superhero; but on a fateful day, when Stupendous faces an giant, indestructible robot, they get a lot closer to the enigmatic superhero than they ever thought possible.

As it turns out, the evil mastermind behind the giant robot is after more that just the satisfaction of destroying Copperplate City’s protector:  Professor Mayhem has his sights set on Vincent’s parents!  There’s a long standing score to be settled between Vincent’s dad and the deranged genius and an intense, unrequited crush that is about to turn deadly.  When Captain Stupendous repeatedly fails to stop the giant robot and its evil controller, Vincent realizes is up to him, with the help of Max and George, to save himself, his parents, and everyone in Copperplate City.

For readers who like average kid turned “superhero” stories (Powerless, Dull Boy, Hero), Geeks, Girls and Secret Identities is a solid choice.  And even if donning tights in the name of justice isn’t your thing, you can’t help but enjoy this fast-paced, cinematic, action-packed buddy adventure.