Here Where the Sunbeams are Green 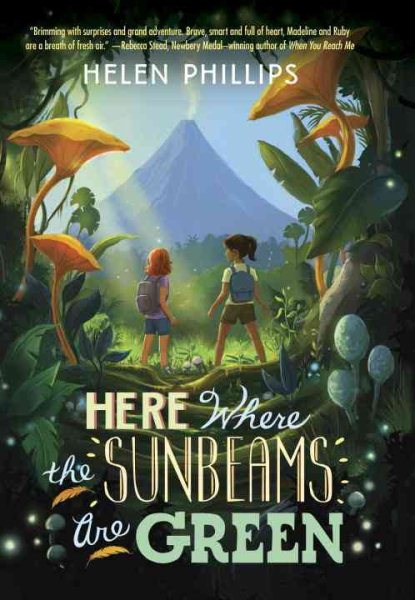 High above the dense Central American rain forests, Mad and her younger sister Roo fly in a tiny plane towards a massive volcano.  Roo is barely able to contain her excitement while Mad’s hanging on for dear life as the little plane shifts this way and that.  They’re on the way, with their mom and Ken/Neth (an annoying “friend of the family”) to meet Mad’s dad, “The Bird Guy” – a world renowned ornithologist – who’s been holed up at an exclusive resort at the base of the volcano for more than 7 months.   Mad’s dad would go anywhere to study rare birds, and when he got the offer to search for a very special, thought-to-be-extinct bird in the forests surrounding ” the world’s greenest resort,” he jumped at the chance.  But soon the one month trip turned into three, then into seven, and their dad stopped communicating with them.

All Mad and Roo have is “The Very Strange and Incredibly Creepy Letter” from their dad that reads like a bizarre poem and makes absolutely no sense at all.  But the creepy letter is just one strange thing in a land of very strange things:  when they get to the “too perfect” resort, Mad’s dad is acting all wrong;  the girls’ mom quickly develops “yoga brain” and stops caring about anything; and the jungle seems to pulse with an energy that draws them in, despite Mad’s fears.  When their new friend Kyle and his odd grandparents tell Mad and Roo the ominous legend of the Volcano Bird, the girls realize that the bird, the volcano, the resort, and whatever is going on with their parents are all tied together and it’s up to them to untangle the webs of danger and environmental intrigue before its too late.

Debut author Helen Phillips‘ Here Where the Sunbeams are Green is a lush, imaginative story about bravery, the power of family, and the precious, precarious nature of life on Planet Earth.  Mad and Roo make a great pair: where one is timid, the other brave; one is playful, the other subdued; one rushes in without thinking, the other analyzes and contemplates.  They use their differences as strengths and rely on what each other to make themselves a formidable pair that can face almost anything.