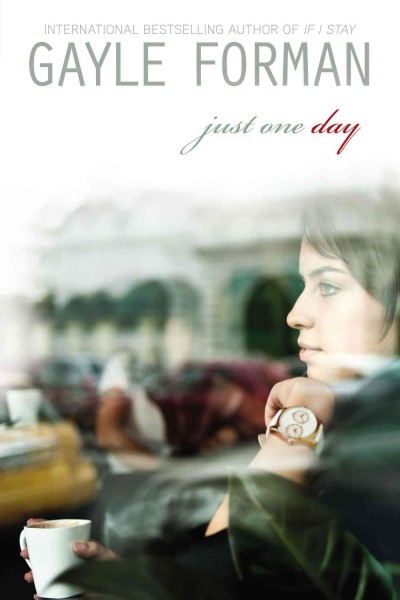 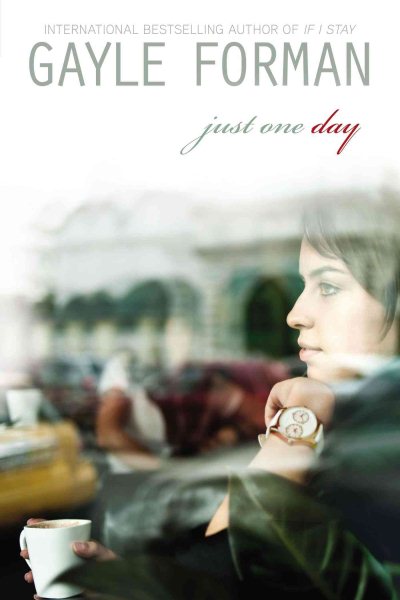 “Altering identity, altering reality” – in general, we believe that a few times in life a person is given the chance to do just that: moving to a new town where no one knows you; going off to college, especially if you choose a school where few (if any) of your high school friends are going; when you start a new job; or when you travel.  And the transformative power of travel is at the core of Gayle Forman’s latest, Just One Day.  As Gayle herself wrote in the letter to booksellers that accompanied the ARC: “sometimes on the road, the most amazing, frustrating, eye-opening, terrifying, bewildering and beautiful things can happen, transcendent things that change your life in ways you might not know until you’re looking back.”

Recent high school grad and all around good-girl, Allyson, is on a guided multi-city tour through Europe with her best friend Melanie.   In Stratford-Upon-Avon, the girls decide to skip the formal performance of a Shakepeare play and instead go to an improptu, guerilla-style Shakespeare in the park performance.  And its here that Allyson first sees charismatic Willem, a Dutch actor towards whom she feels an instantaneous attraction.  When they meet up again in the train station in London, Allyson does something so out of character for herself she can hardly believe she’s doing it: she boards a train to Paris with Willem to spend the next 24 alone with him in the city before heading home to the States.

Their day in Paris is the most exhilarating  romantic, “alive” day Allyson has ever had and the spark she felt when she first saw Willem turns into a consuming flame before the day is over.  When she awakens the morning after her whirlwind day, in a bohemian artists’ squat in a seedy Parisian neighborhood, Allyson is shocked to discover Willem is gone. Her life feels as though it has been turned upside down and she gets lost in a depression that stretches far into her freshman year at college.   At first Allyson blames Willem, thinking it’s her broken heart that has caused her to give up on life, but ever so slowly Allyson realizes that “that whole day, being with Willem, … made me realize that all my life I’d been living in a small, square room, with no windows and no doors.  And I was fine. I was happy, even, I thought.  Then someone came along and showed me there was a door in the room.  One that I’d never even seen before.  Then he opened it for me.  Held my hand as I walked through it. And for one perfect day, I was on the other side.  I was somewhere else. Someone else. And then he was gone, and I was thrown back into my little room.” (179)

Things finally turn around for Allyson when she realizes that she can choose to open that door herself and walk through it all on her own.  And in the forthcoming companion novel from Forman, Just One Year,  I’m looking forward to seeing that.