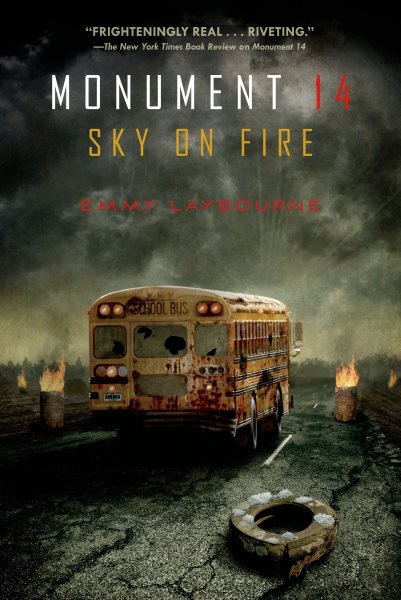 The natural age progression occurs in everyone, in other words, we all get old. Usually, it just happens, it is a part of life, but imagine being forced to grow up, take care of multiple children, and fight a war you never prepared for, all the while you are worried about just surviving until morning. This is exactly what Dean and Alex Grieder experience in Emmy Laybourne’s Monument 14: Sky on Fire. The teenage brothers live in Monument, Colorado, one of many states that have recently been attacked by an air born virus that affects anyone with a blood type. The brothers and 12 others found refuge in a department store but now that one of them has been fatally injured, do they stay or do they make the 60 mile trek to Denver International Airport, where there will hopefully be a plane waiting to fly them to safety. A difference in opinion leaves the group split in two, one half fighting the defensive in a school bus on their way to Denver, while the other fights an offensive battle back in Monument.

By the time the group that left makes it to Denver International, they have lost two of their own. Josie, the oldest girl of the teenage group has gone insane from exposure to the compounds in the air and run off into the wilderness. The boy, Brayden, who was fatally wounded ends up in the hands of five air force cadets, to say the least, he never sees the inside of the airport. Now that the group has made it, they must somehow muster together a rescue team to go back to Monument to save the others. None of the military personnel who are in charge of evacuating the survivors is willing to go, and for good reason. Operation Phoenix is due to start at any moment in attempt to rid the air of the compounds. The military is literally going to set fire to the air in hopes of burning away the poisonous molecules and bringing sunshine to the desolate land. The downside is that there is no way to burn away oxygen without killing every living thing in the general area.  Will the two brothers ever be reunited, will Josie ever be found and brought back to sanity, or is the entire country doomed?

I highly recommend this book to anyone who has an interest in fast paced, thrillers with themes of survival, hope, and love found in the face of true despair.