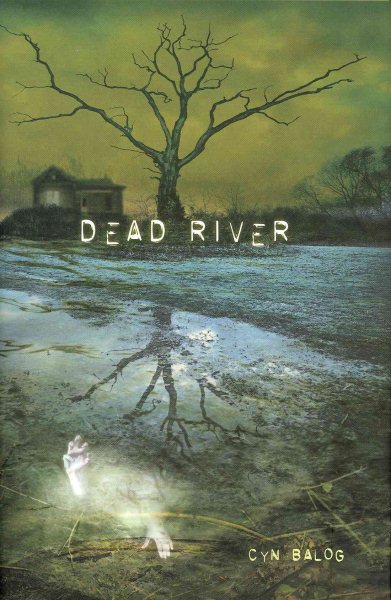 “Have you ever heard of suicide by river? You just wade out deeper and deeper, and before long the current carries you away. And by then there is nothing you can do about it.” (7)  When Kiandra was 7, her mother did just that. With no warning, no goodbye, nothing  – just walked into the river beside their home and let herself be swept away.  Now, 10 years later, Ki is still drowning in grief.  She won’t let her anger and confusion about her mother’s suicide go, hiding it deep inside, nursing it like a cancer.   Although her grieving father moved them far away from the little house by the river, water still gives both Ki and her dad nightmares.  One thing that stopped once Ki moved, however, were the visions: ghostly specters watching her from the river banks, some talking to her, some unable to, most injured, waterlogged and apparently miserable.  But the trade off of the water ghosts for the pain of her loss hardly seems fair to Ki.

Instead of attending the senior prom, Ki has allowed herself to be talked into a river rafting trip by her outdoorsy boyfriend, Justin, and her cousin and Justin’s best friend, Angela.  The teens envision a long weekend and Angela’s family cabin on the banks of The Dead river which is running high with winter melt-off.  Ki has her misgivings about lying to her father about their whereabouts, and she’s not really sure riding the rapids, or camping, are really what she wants to do, but it’s more important to Ki to please Justin and Angela than it is to speak up for what she really wants.  The teens haven’t even been at the cabin one night when the visions Ki hasn’t had for years come flooding back to her, overwhelming her and making her doubt the wisdom of the trip.  When they head out in the raft the next day, it’s only moments into the wild ride that Ki is inexplicably drawn into the water, literally pulled down into the depths and feared drowned by her friends.

Cyn Balog‘s Dead River is a thriller, a ghost story, a paranormal romance, and a tale of teen angst all swirled up into one.  Trying to be so many things unfortunately gets in the way of the novel succeeding at being good at any of them, I’m sorry to say.  I had hoped for a deliciously creepy ghost story and what I found was a main character whose indecision and bratty attitude made me wish she had drowned, a muddy plot, and paranormal elements that were confusing at best and wildly odd at worst.  It would seem Dead River is set to be the beginning of a series of books about Ki, her beloved Trey, and her powers over the spirits who’ve died in/by water, but I think I will paddle on down the river to see what other offerings may await around the next bend.