The way that we are treating our Earth is slowly but surely killing her. One day we are going to wake up and realize too late what our destructive behavior has done. In P.J. Hoover 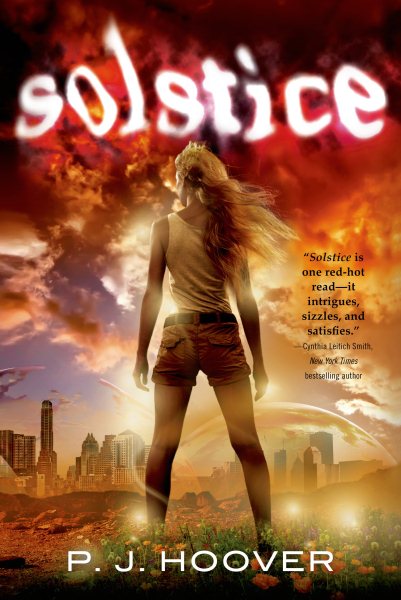 ’s Solstice, Piper is living on an Earth that is feeling the full force of global warming. Her city of Austin, Texas, has done an adequate job of becoming used to the ever rising heat. Whether it is with misters that spray a cooling gel or glass domes that cover sections of the city when the heat surpasses 121 degrees, the city council is trying to save its citizens…or are they?

Piper, a normal high school senior, is slowly starting to realize that the city council is doing more bad than they are good. Her mother, a member of the council, agrees but does not know what she can do to help the city or even the earth. They are trying though; they run the city’s largest green house, Botanical Haven. Piper and her mother have always had a green thumb but Piper never realized how much nature seemed to run her life. She is starting to see different colored moss appear on people. She believes the moss is a symbol of the good/evil ration within the person’s soul. She knows she cannot tell anyone about this moss, not even her best friend Chloe. That is, until she meets Shayne, a new student and a very handsome one at that comes into her life.

Shayne is the envy of every teenage boy and an object of lust for every girl. For a reason beyond Piper’s wildest dream, he chooses to befriend her. Shayne has a secret, a secret that he slowly pulls Piper into; he is really Hades, Lord of the Underworld and he wants Piper to be his queen. He is not the only one though, another boy new to town, Reese, is after Piper’s affection as well. It turns out that Reese is really an ancient, arch enemy of Shayne’s; he is Ares, God of War.

Piper has no clue as to why these ancient Greek gods have decided to appear in her life. They are not the only ones at that, the Fates have begun whispering messages into her ear, Aphrodite is feeding her lies about Shayne’s past life, and her mother has decided to introduce her to her estranged father. Finally, all of the cards are laid on the table; Piper’s father is Zeus, King of all Gods, and her mother is Demeter, Goddess of the Grain and Protector of Marriage. This having been said, Piper must be a goddess as well and if her mother is Demeter, which must mean she is Persephone, Goddess and Queen of the Underworld.

She can feel that this is all true but what can she not remember any of it? Who is “Piper” if she is truly Persephone? Does go back to her love Hades or does she start anew with Ares? If the fate of the Underworld and the fate of the actual world rested on your shoulders, what would you do?