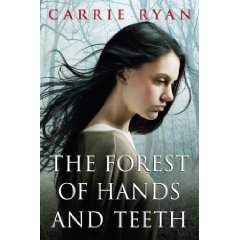 The Forest of Hands and Teeth

The Forest and Hands and Teeth, Carrie Ryan’s debut novel, begins seven generations after the Return, an undead plague that has ended civilization as we know it. T

he novel’s heroine, Mary, lives in a village surrounded by one last vestige of industrial technology: a chain-link fence, beyond which is a vast forest full of shambling, eternally ravenous zombies –the forest of hands and teeth. No villager ever goes outside this fence, unless they want to die, or worse, be infected and become one of the undead.

Mary’s world is bounded not only by the fence but by the archaic traditions of her people, which are dictated by a religious order called the Sisterhood and enforced by the Guardians.  Marriages, childbirth, death, every stage of life must be controlled to sustain the village’s precarious existence. And after so long an isolation, the village is beginning to forget that any way of life ever existed.  Most doubt that there really was a time before the Return and that nothing at all exists beyond the forest.

Mary dreams of bigger things: she struggles against the confines and conventions of her world and her aching longing and restless need are in constant parralell to the endless hunger of the Unconsecrated in the forest.  She hungers for epic romance and adventure beyond the fence, for answers to her questions, and a life without constraints. Every choice she makes is propelled by her desire to escape, to find answers, and to live a passionate, full life outside the confines of her world.

For me, the  novel lacked tension, fear, and effective conflict.  At first the book reminded me of M. Night Shyamalan’s The Village and of course The Dawn of the Dead movies.  But the suspense of The Village and the horror of The Dawn of the Dead were both lacking in The Forest of Hands and Teeth.   Mary’s reckless lust for freedom was as much of a danger to her loved ones as the Unconsecrated’s lust for the living flesh; the Sisterhood and the Guardians weren’t as ominous and powerful as they could have been; and the encounters with the zombies seemed flat and certainly weren’t terror inducing.  I wanted to hurry to the end this wearying journey through a gray, moan-filled forest.