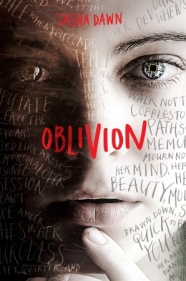 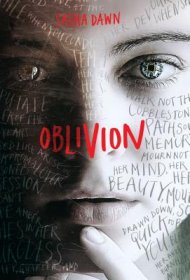 Sixteen-year-old Calliope Knowles is a self-described bitch, but that word hardly describes her true self, a traumatized young woman who is a ward of the state of Illinois and a clinically diagnosed graphomaniac.   Graphomania is a compulsion to write; Callie writes “for the same reason most of us breathe” (3).  Although she feels like a carnival side show and hates being a slave to the words in her head, the words motivate her to remember.

Ever since her father disappeared, Callie has been compelled to write.  Although the authorities don’t believe she killed her father, they do think she knows something about his disappearance and about twelve-year-old Hannah Rynes, who disappeared at the same time.

As Callie’s story unfolds in Oblivion by Sasha Dawn, readers learn that her father is/was Reverend Palmer Prescott, founder of the Church of the Holy Promise.  Palmer abuses his position of power to manipulate and to control women.  Callie clearly remembers occasions of such manipulation and for what purpose her father uses his confessional box.  For stabbing Palmer in the thigh while trying to castrate him, Callie’s mother has been institutionalized.  When her father turns up missing, Callie is sent to County Juvenile Hall, until she is taken in by the Hutch family.

Callie feels like an unravelled sweater beside the “got it together” Lindsey, who has looks, money, charm, and social collateral at Carmel Catholic.  Lindsey “lives under the illusion that life is like a cupcake—sweet, delicious, uncomplicated, and not a bite more than she can handle” (180).  All is idyllic in Callie’s new family dynamic until she dares to cross Lindsey and becomes the target of Lindsey’s wrath.

Although she lives in oblivion, Callie hates the prodding, the poking, the nosiness of therapy, and the antianxiety drug Ativan, prescribed by her therapist, Dr. Ewing, fogs her memory.  “Medicate me, and you might as well have my soul,” (69), claims Callie, who needs her memory to remember, to solve the mystery of these missing persons.  But her psychosis so disrupts her life that she can’t eat or sleep; she cannot focus or function without a pen in her hand—a red Sharpie, to be exact.  Callie only feels safe in the arms of Elijah Breshock, a boy she met at County who himself has been taken in by a family of wealth and privilege.  His kisses give Callie clarity when every nerve in her body hums, when her daydream/nightmare sequences threaten to push her over the edge, to suffocate her.

Just as a person who stutters suffers from blocking, Callie repeats the same word or series of words over and over.  Are these words turn gibberish or the secret pieces to the puzzle she’s trying to solve?  Scared and confused by the slideshow of snippets, hints of images that she can’t explain, Callie wants to just be normal again.

John Fogel offers her that option when he gives her a note during chapel, a note that connects John to Callie in an eerie way and sets up a pair of love triangles in the novel.  John sees Callie’s compulsion to write as a possible art, encouraging the poetry she produces.  He also becomes her partner in solving the mystery, but at what cost?

Sasha Dawn’s psychological thriller compelled me to read on, to make the connections, to draw the conclusions, and to solve the mystery.