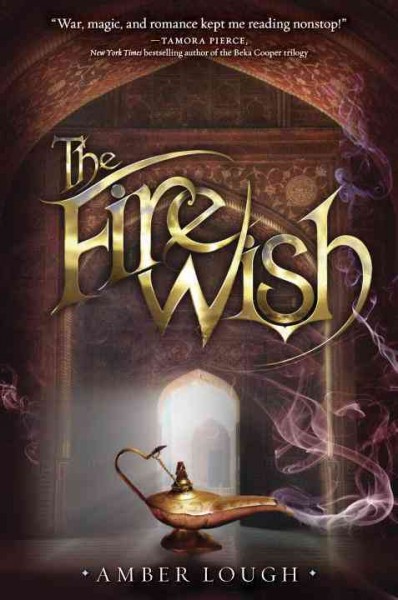 By: Donna
In: Action & Adventure (YA), Multicultural (YA), Sci-Fi & Fantasy (YA), Young Adult Book Reviews 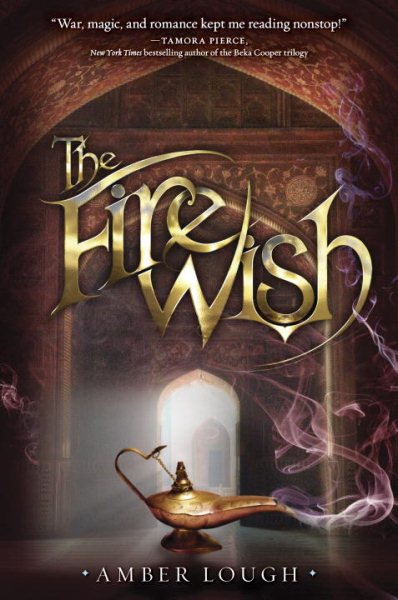 Amber Lough writes The Fire Wish with a creative style that showcases the simile, so analogies like “The music hung thickly in the air, like the scent of cinnamon” (2-3) are common throughout her imagery-rich book.  The tale—told from the perspectives of two girls living in two different worlds—also features battles, magic, oud music, and many forms of love and loyalty.

One girl, Najwa, is a jinni—a being of fire and sand that lives within earthen tunnels among gems and magic.  In a simple transporting spell, Najwa penetrates the wards that protect the palace in Baghdad enabling her to bring back a rose from the most beautiful garden on earth.  Her ability earns her a place with the Eyes of Iblis Corps whose leader, Faisal, plans to use Najwa as a key player in the war with humans.

The other, Zayele, is a human living in the tribal village of Zab.  At fifteen years old, Zayele is about to be the bride for the caliph’s son, Prince Kamil.  She will be moving from her home, family, and all that is familiar and travelling by barge to Baghdad to marry a man she knows nothing about.  Her primary concern is for her eleven year old brother, Yashar, a weaver of words and a writer of poetry who suffers from blindness, a condition for which Zayele blames herself.  She can’t bear to leave him without a guardian.

So out of desperation while on the trip, she wishes on a jinn, making a demand that the jinni girl take her place and send her home, but somehow, the wish backfires, and the jinn named Najwa changes places with Zayele. The two girls look enough alike so as to make the switch a plausible one.  But the wish is a Fire Wish, the most devastating thing to demand from a jinn, since it robs the being of free will and power.

Caught in alternate worlds, both girls realize they are pawns and decide to work towards setting right the wrongs that they see.  Although the culture shock is immense, the girls are resilient, and neither is put off by differences in race and power.  Whether they are able to undo the wish, save their respective social systems, and reunite with their loved ones is the multifaceted question at the core of this book’s plot. The Fire Wish is the first book in the Jinni Wars series, a book that sheds light on the Middle Eastern culture, offering details about Baghdad, henna, hijab, turban, prayer, and the prospect of peace.  Lough puts a human face on the evil, bloodthirsty demons each side sees in the other and proposes a House of Wisdom, where humans and jinn work side by side and multiple minds are willing to see both sides to an argument.   While this first installment doesn’t resolve the conflict, it introduces key players and sets in motion life-altering events.