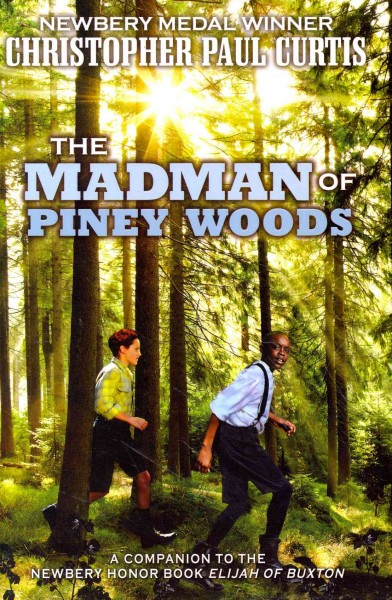 The Madman of Piney Woods 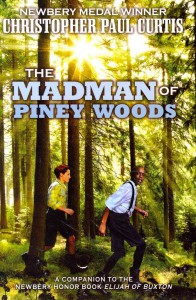 Earlier this Autumn, Newbery Medal winner Christopher Paul Curtis returned to Buxton, Canada, with The Madman of Piney Woods.  It’s forty years later than his last visit and the children we met have grown and the town has flourished.  11 year old “Benji” Alston loves roaming the Piney Woods that surround Buxton, whether he’s playing American Civil War with his friends, or visiting the secret swimming hole, or just passing time outside.  Benji’s set his sights on being a newspaper man and is thrilled when he gets an apprenticeship at the newspaper in neighboring Chatham.  “Red” Stockard is a scientist, observing the world around him and judging everything with the logical, impartiality of the scientific method. Red’s also a peacemaker and a student of human behavior, and often finds himself maintaining the  balance amongst  his group of friends.  Red and Benji’s growing friendship is complicated by the fact that Red’s Irish grandmother is extremely racist and fearful, but both boys choose not to let others’ opinions keep them apart.

Both boys have heard the scary stories told by the fireside about the crazy, flesh-eating, giant who haunts the woods between their towns.  But something is going on that’s never happened before: the  man approaches both boys when they’re out in the woods alone.  The madman tells Benji he thinks they’re both alike in their understanding of the woods, which upsets Benji greatly, even though deep down he knows there’s some truth to it.  Others in Chatham and Buxton are interacting with the madman more than normal too; and it’s only a matter of time, unfortunately, before something terrible happens, forcing Benji and Red to do all that they can to save a man’s life.

Beneath the surface of a story about an unlikely friendship and the mystery of recluse who haunts the woods, readers will be confronted with other thought-provoking issues as relevant today as they were in 1901: racism, both between the whites of Chatham and the blacks of Buxton, but also between the Irish and the Canadians, is examined from a few perspectives, as are questions of forgiveness, justice, and integrity.  In The Madman of Piney Woods, Curtis eloquently, gently, and wisely, explores the universal question:  “who’s to say why the burden that one person carries so easily absolutely crushes someone else?  It’s all a part of what makes us human, and it’s another of the parallels that shows, no matter what our superficial differences, there is, as a redheaded lad from Chatham and an African-Canadian boy from Buxton discover, much more that binds us together.” (author’s note).  The Madman of Piney Woods is realistically complicated, occasionally somber, and heartbreaking. There is also humor, hope, and adventure to be found in these pages, and any reader will be enriched by spending another afternoon with this great writer.