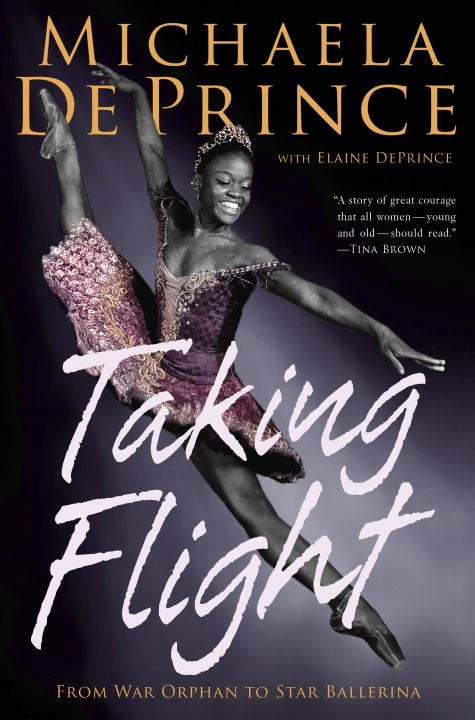 A good story takes you places. And with Taking Flight, a memoir by Michaela and Elaine DePrince, the reader journeys from war-torn Sierra Leone in West Africa to recital halls in New York City with Mabinty Bangura.

With this memoir, readers learn something of West African culture. In a typical household in the Kenema District of southeastern Sierra Leone, marriages are arranged, polygamy is acceptable, domestic violence is permissible, women learn how to cook, clean, sew, and care for children, and a girl child is not a cause for celebration—especially not a girl child born with the skin condition vitiligo that causes a mottled pigmentation pattern.

But Mabinty was not born into such a family. Her parents, Alhaji and Jemi, married for love and her father refused to take a second wife. Born into this forward thinking family, Mabinty learned to read, write, and be independent. At four years old, Mabinty could speak Mende, Temne, Limba, Krio, and Arabic—languages she picked up from the marketplace.

In 1991, when civil war came to Sierra Leone, the rebels of the Revolutionary United Front burned the rice and palm trees that provided the family’s income and murdered husbands, fathers, and sons. Now fatherless as well as penniless, Mabinty and her mother were forced to live with her Uncle Abdullah, their guardian under Sharia, Muslim law. Yet Jemi would not marry Abdullah, a rejection that enraged him and brought down punishment and abuse. Without food or love, Jemi was starving both literally and figuratively. When she died, Jemi left Mabinty without a protector. Gone were the happy days when Mabinty would fall asleep with her mother’s armed wrapped around her and her singing voice carrying her to a place where she could forget her misery.

Orphaned and considered useless by her Uncle, Mabinty is the target of his abuse: “Look at you. How ugly you are. You have the spots of a leopard. I am wasting food and money on you. I will not even get a bride-price in return. Who would want to marry a girl who looks like a dangerous beast of the jungle?” (14). Due to his ire and his greed, Abdullah sells Mabinty to an orphanage where violence, death, hunger, and fear continue to be her companions. She is called Devil Child and Leopard Girl by school bullies, and Auntie Fatmata finds all variety of reasons to beat her or to deprive her of food. At the orphanage, she is Number 27, not even given the dignity of a name.

Despite the darkness of her existence, Mabinty finds bright spots. She begins to forge bonds of friendship when she puts her active imagination to work inventing games for rainy days. She also befriends Mabinty Suma, and she knows the kindness of Teacher Sarah and that of Papa Andrew. When the dry and dusty Harmattan winds blow down from the Sahara Desert, a magazine caught in the orphanage gate is rescued by Mabinty. From a photograph of a dancer in this magazine, Mabinty’s dream to be a ballerina blooms. That dream takes flight when Mabinty is adopted and rescued by the DePrince family in New Jersey.

Although life in the United States isn’t all rosy, readers journey with Mabinty, now Michaela, as she grows from a child afraid of debils (a combination of the word rebels and devils) into a young adult who navigates racial profiling, bigotry, and racial distrust. Michaela transforms from a grumpy, pushy, selfish girl into one who is strong yet soft, delicate, and gracious—one capable of the grand jeté, a favorite dance step that involves leaping high and far and gives the sensation of taking flight.

As much as this is a coming-of-age story, it is also a sports story and a survival tale. Readers discover that injuries and pain are facts of life for an athlete whose focus on her sport both intoxicates and consumes her. Conditioning takes concentration, control, hard work, strength, flexibility, and agility. Being separated from family is another sacrifice that Michaela endures on her professional path. Michaela also navigates emotional, physical, and artistic ups and downs as she learns she needs to use her face as much as her feet. With this memoir, Michaela shares her story of perseverance and hope and joins the ranks of other inspirational people of color: Arthur Mitchell, Ruby Bridges, Malala Yousafzai, and Gabby Douglas. Despite the hopelessness of her childhood conditions: malnutrition, disease, and mutilated bodies on the sides of the roads, Michaela’s devotion to her dream never dies.