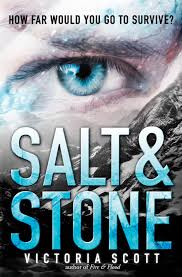 Boston, Massachusetts, teen turned Montana transplant, Tella Holloway has taken on the challenge of the Brimstone Bleed to save her brother Cody’s life.  Tella used to be “the girl who catalogued sandwich shops by which had the best oatmeal cookies.  Now [she’s] the girl who catalogs death and the girl who vows revenge” (187).  She’s not the lone Contender in this competition that covers four ecosystems: desert, jungle, ocean, and mountain; each with its own misery, dangers, and threats.  Because it is a sequel, Salt and Stone by Victoria Scott features the last two ecosystems and picks up the plot where Fire and Flood left off.

The questions central to Scott’s story revolve around how far we’d go to survive and what sacrifices we’d be willing to make to save the one’s we love.  In an unspeakably cruel act of manipulation, organizers of the Brimstone Bleed intentionally infect various members of society and then bring together their family members to compete for a cure; the winner of each leg of the race receives a five year antidote.  As they vie for the prize, some Contenders become vicious, territorial, and animalistic.  With the assistance of odds makers and bookies, people place bets on the Contenders, reducing them to objects or likening them to horses in a race.  Although 122 people initially enter the race, various competitons whittle that number down to 41 by the last leg.

During the course of the game, intending to test the Contenders’ loyalties, designers send in hunters to kill Contenders and stage competitions that make them kill one another or their Pandoras.  A Pandora is a genetically engineered animal companion who—with a special ability like breathing fire or changing form—helps the Contenders survive, regardless of the danger.  These protectors, with whom their Contenders communicate telepathically, provide a sense of security in an otherwise uncertain world. Tella relies on her black fox Madox and upon Monster, a grizzly bear Pandora that she has acquired.

Along with Guy Chambers, who is the most resourceful Contender, Tella is determined to gain a position as a Brimstone Bleed employee so that she can infiltrate the organization and destroy the race from the inside.  Conflicted by her emotional response to Guy, Tella doesn’t want to be without him. Yet, she realizes she has performed like a child needing protection or a damsel in distress.  Determined to revise that role and to search for independence, Tella takes on a protective role with a team of players.  For example, just as Katniss attempts to protect Rue—characters from Suzanne Collins’ trilogy—Tella protects Olivia.  Tella also becomes a protector of the Pandoras, proclaiming, “Just because a Pandora doesn’t display abilities doesn’t mean they’re dispensable” (214).  This platoon captain role, however, means that Tella puts herself in frequent danger and jeopardizes her own ability to win.  Competing in this race, Tella realizes, is like becoming a drug addict: “One small slip leads to another, and before you know it, you find yourself in an impossible situation and can’t fathom how your life has spiraled so far from what it was” (111).  As Tella becomes more and more divided, Guy tells her: “Many enter the race conflicted.  One side of them says to remember their humanity; the other side says to become an animal, to live and breathe only to win the Cure” (220).  Because anger dilutes her fear, Tella succumbs to that emotion, determined to fight a fierce battle but to protect Contenders and Pandoras along the way.  However, the unpredictability of other players—like Cotton, Harper, and Willow—and the various impossible obstacles presented by the race create unsuspecting conflicts and surprises.  Readers are left wondering, who will win and at what cost?

A tapestry of old ideas with a new design, Salt and Stone by Victoria Scott, weaves threads from the television shows Survivor and The Amazing Race as well as from The Hunger Games trilogy by Suzanne Collins to create a curious combination that translates a story about survival amid power, corruption, and manipulation and gives readers a new way to imagine the world.