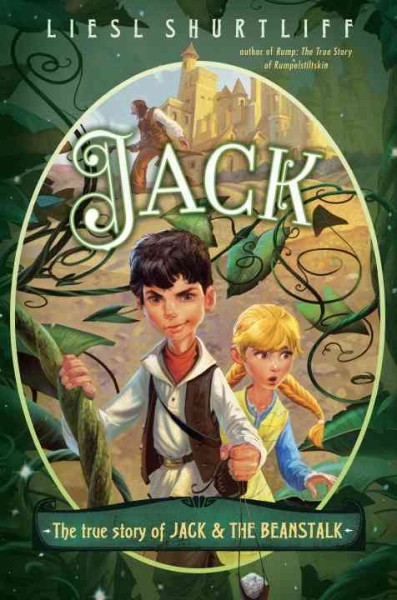 Jack: The True Story of Jack & The Beanstalk 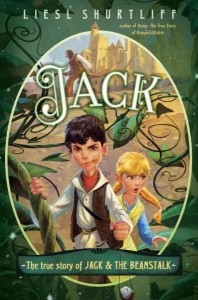 All Jack wants is to live up to his namesake: “maybe I was born to be great, but great at what?” (2)  And that’s really hard, considering that “we lived on a little farm in a small village, where nothing big or great has ever happened in all my twelve years.” (3).  Young Jack was named after a distant grandfather who purportedly conquered nine giants and married the daughter of a duke.  Ever since Jack can remember, his humble farmer father has told him stories of this grandfather, and Jack has longed for any chance at adventure to prove his right to such a great name.  Trouble is, without adventure, Jack turns to mischief and troublemaking, so he’s always on the defensive, trying to get out of scrape after scrape without being caught or punished too harshly.

Strange things are happening around his village, however; after a series of terrible thunderstorms, the villagers find their homes, fields, stores, and livestock literally scooped from the ground.  Soon, there’s little left of the village, and Jack, desperate to prove that he really did see giants climb down from the sky and steal his family’s barn with his father inside it, trades the family cow for magic beans that produce a giant beanstalk.  Not one to shy away from the prospect of adventure, and with little else than the stories of his heroic grandfather to guide him, Jack climbs up through the clouds  into a world so vast he can hardly believe his eyes.

In the world of the giants, Jack encounters both immense danger and big fun, and if it weren’t for his annoying little sister, Annabella, tagging along, he’d be having a right good adventure.   Soon though, Jack realizes that the drought that is plaguing the giants’ land and causing them to steal from Jack’s world is a bigger problem than he can solve on his own. If he wants to make things right, Jack finally comes to understand, he’ll have to grow up a little bit himself: “I was supposed to be the hero. Jack the great. But maybe part of being great was knowing when to step aside, and let someone else step up, even if they were smaller than you.” (268)

In Jack, Liesl Shurtliff brings readers another imaginative expansion of a classic fairy tale.  Shurtliff’s story is charming, fresh, and thoughtful and her characters are likable, engaging, and realistically drawn.   Every page encourages young readers to laugh, as well as empathize, while rooting for Jack to find his own path and make his whole world great.