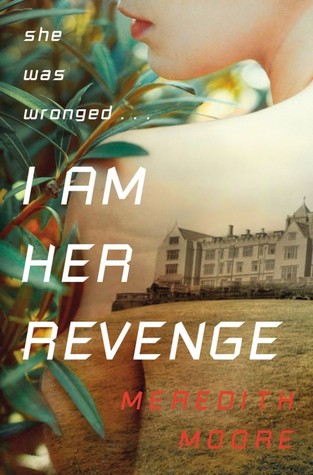 I Am Her Revenge

Heart-rending love stories abound in both history and literature, and Meredith Moore has drawn from that store of 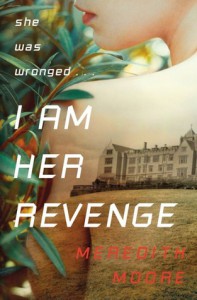 knowledge to write her debut novel, I Am Her Revenge.  Taking threads from the tales of Elaine and Lancelot, Romeo and Juliet,  Merlin and Vivien, and Anne Boleyn and Henry VIII, Moore weaves a tapestry of mystery, romance, intrigue, and revenge.  This is a tale told by a masterful storyteller, complete with imagery richness—details like chiseled cheekbones, a whisper-soft kiss, the smell of a barely tamed wilderness, and the sky, a riotous canvas of pink and orange and red, abound.

Dismantled by love and having experienced intimately the hurt and blinding pain of unrequited love, Morgana Whitfield sets out to destroy the man who rejected her.  She uses her daughter Vivian Foster as a pawn in her game of revenge.  Named for the enchantress from Arthurian legend, Vivian is objectified and raised to be a friendless, aloof, and heartless weapon.  Physically, psychologically, and emotionally tortured, Vivian performs like a puppet under Mother’s power.  With lessons in flirtation, seduction, and deception, Mother teaches Vivian to take what she wants and to never waste her power.

Because nothing is more important than family, Vivian suffers for Mother and allows Mother to mold her, to create the persona that will entrap the son of the man who hurt her all those years ago.  At seventeen years old and designed to deceive, Vivian will attend Madigan Boarding School in England, wearing the persona of an edgy, confident girl, friendly and desirable, enchanting and poised to destroy.  She is ordered to use her irresistible charm to entice and ensnare Ben Collingsworth, a student at the school who innocently believes you can never hurt someone you once loved.  Mother’s revenge will be complete when Vivian destroys this boy.

At Madigan, Vivian is surprised to discover her childhood friend, the boy she named Arthur because he was strong, brave, and kind—“the flower of chivalry” (48).  Arthur, who was also raised by a parent incapable of love, is twenty years old now, the gardener who calls himself Tom.  The son of Mother’s partner, the Helper, Arthur vows to protect Ben and tries to make Vivian see the twisted and tortured person Mother has become, an insane person who is using Vivian and controlling her life, but Vivian believes she owes her mother, that she can ease her pain and give her closure by doing this for her.

As the plot plays out, Vivian finds herself caring for Ben, confessing some of her past abuses.  When Ben shares his own horrors, the two began to bond, to confide in and comfort one another.  In her explorations of the school grounds and surrounding towns, Vivian not only uncovers unsettling secrets but also discovers clues to Mother’s past, clues which rouse her curiosity and set in motion a surprising discovery.

Emotionally torn and enchanted by the bleakness of the moors because they remind her of home, Vivian loses herself in drawing.  The stone walls and trees, especially, capture and hold her imagination.  She finds strength in the melancholy, rugged, and lonely landscape capable of enduring despite the English winds.  Her art reflects a piece of her soul and her mind.  While drawing, she recalls how Arthur used to write poems to go along with her drawings.  “Ekphrasis, he called it, poetry to echo the beauty of visual art” (79).  Trading sketches and poems, the two made their own conversation, each responding to the creativity of the other.  Now, as Vivian stumbles upon pieces of the truth, the only person she trusts is Arthur, but Arthur rejects her.

While the drama of adolescent bullying, rebellion, and cliquishness unfolds around Vivian at Madigan, Mother pushes her to play her role and promises to punish her for any disobedience. When the climax of the novel occurs, a climax that quickly plummets to a resolution, the reader will likely be surprised as well as shocked.  For readers who crave plot twists, ulterior motives, and mesmerizing characters, Moore’s novel does not disappoint.