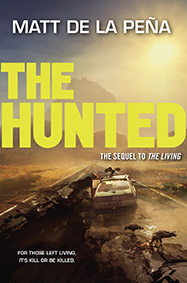 By: Donna
In: Action & Adventure (YA), Young Adult Book Reviews

A stint as a Paradise Cruise Lines employee on a luxury ship bound for Hawaii was supposed to put cash in his pocket so that seventeen-year-old Shy Espinoza could court a girl and help his mom pay bills, not set him adrift at sea for 36 days in a small sailboat, battling hunger and dehydration, baking in the relentless summer sun, and slipping into schizo territory.  When he and his companions—Carmen, Marcus, and Shoeshine—finally arrive on Venice Beach, they are ready for a hot meal, some protection from nature’s elements, and a reunion with their families.

Instead, they encounter the ruined coastline of California caused by earthquakes and more that’s unfamiliar than familiar.  On their reconnaissance, they discover that Romero Disease, created by the corrupt Mr. Miller of LasoTech Laboratories, has reached epidemic proportions, reducing the west coast to a quarantine zone.  However, the devastation itself isn’t their biggest worry; “it’s the way folks may have adapted” (19), and they soon find themselves hunted, first by a gang of vigilantes on motorcycles and then by men dressed in black and armed with guns.

The three teens and their guide, Shoeshine—a man in his mid-70s with a braided chin beard and a powerful presence—find themselves on a path that they have to see through.  They must get seven syringes and a chemical formula to research scientists in Arizona so that a vaccine can be developed.

This is the basic plot of The Hunted, Matt De La Peña’s sequel to The Living.  The novel recounts an incredible ten-day journey from Venice Beach to Avondale, a journey fraught with hardships.  As the hunted, Shy and his companions battle bullets, gangs, rage, heat, starvation, dehydration, exhaustion, and other death threats in their effort to save the world from an epidemic and from the invisible trap of capitalism.  On their flight, as truth evolves, morphs, and inverts, they learn that cities are a pretense at meaning, order, and authority; and that hardship binds people.

De La Peña’s book reveals a glimpse at what happens to some people in desperate circumstances.  He also shares a deeply philosophical and hopeful story.  Under the spell of idealism and with no idea he is a leader, Shy feels compelled to discover “what’s on the other side” of his vision and whether he and Carmen will find the “rainbow connection” alluded to in Carmen’s tattoo.  This powerfully written book is a horrifying look into humanity’s possible future.  Its many plot twists and surprises, as well as its threads of romance, action, and multiculturalism, keep the reader’s attention from beginning to end!