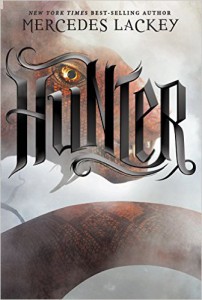 The Diseray, a nearly apocalyptic war between Othersiders and humans, has completely altered life on Earth in Mercedes Lackey’s new novel, Hunter.  After the Diseray, the world was rebuilt, laid out to protect the elite from monsters that began to cross over from the Otherside, invading Earth with frequency and with impunity.  Mythical beasts like Harpies, Furies, and Kraken, and multiple other manifestations of terror—like Knockers, Gazers, Jackals, Drakken, Ketzels, and Redcaps—have made Hunters necessary protection.

In this new world, where most meat is vat-grown and eggs and dairy are synthesized from vegetable oils, economic disparity is glaringly obvious.  Real meat, eggs, and dairy are luxury items reserved for those living a protected life behind the Barriers in cities like Apex.  Among these Cits, as they are called, one in 100 or 200 persons is born with the ability to do magic, to call their hounds, and to defend ordinary people from the monsters of the Breakthrough.

One of these Hunters, sixteen year old Joyeaux Charmand, has been summoned from her mountain home at the Monastery to join the defense team at Apex Prime.  At Apex, Joy experiences more luxury than she is used to, and this “life out of balance” (115) makes her uneasy.  On the mountain, where she learned to manage her magic from Kedo Patli, a Native American Master Mage from Mexico, Joy learned to “eat it up, wear it out, make it do or do without” (102).  This previous lifestyle of ascetic simplicity taught her the value of hard work, conservation, collaboration, and selflessness.

At Apex, she joins a competitive team of other Hunters, like Karly and White Knight—a Christer who shares an interesting perspective about the Diseray.  Away from the Monastery, the focus is on trending, ranking, and vidding—filming the Hunters and airing live video feeds.  She also meets her love interest, Josh Green, a Psimon who can hear and project another’s thoughts.  But she’s leery of someone with the potential to see inside her head, unsure if he can be trusted.  She also encounters bullies like Ace, a stunningly handsome, more rockstar than Hunter, rival.  With Ace, Joy applies her monastic training: “Deflection is more efficient than opposition” (114).

With this uneasy-making new life, where cameras follow her everywhere, Joy realizes she is more a figure of popular entertainment, like a sports star or a Hollywood actress or a competitor in a reality television adventure like Survivor,  than she is a true protector engaged in serious business. The trivializing that the media does to undermine the important work of the Hunters in keeping the world safe disturbs Joy because all of the hype and fanfare remind her of the Masters’ wisdom: “Be careful when someone repeats something too often; things that are repeated often enough can start to seem to be true, when they are not” (118).

Although Joy despises the secrecy, the deceit, the imbalance, and the waste that surrounds her in her new life at Apex, she is even more concerned about the social inequities and how the drug of power numbs the brain into complacency.  Despite her suspicions that she is caught in a political power-play as a pawn, Joy continues to endanger her own life and to put the wants and desires of others ahead of her own.  She hopes to bring awareness so that the oblivious might avoid the “creep. . . , when things just kind of creep up on you so gradually you don’t know it’s happening until someone points it out” (241).  Because of her previous training and her personal beliefs, she asks hard questions and won’t give up, but at what cost does her candor, her curiosity, and her courage come?

Lackey’s futuristic and cautionary tale mirrors action-packed books like The Uglies trilogy by Scott Westerfeld with its strong female character Tally Youngblood and like The Hunger Games trilogy featuring Katniss Everdeen by Suzanne Collins.  Besides its insightful yet disturbing commentary on current social and political practices, another of my favorite aspects of the book is Lackey’s rich and descriptive style, which allows a reader to watch a movie inside his/her head.  Whether reading about Joy’s Hounds, a date with Josh, the challenges and surprises encountered on a hunt in the Spillover, or the Hunter Mandalas—round intricate designs tattooed on every Hunter as identification—Lackey paints an easy-to-visualize picture.