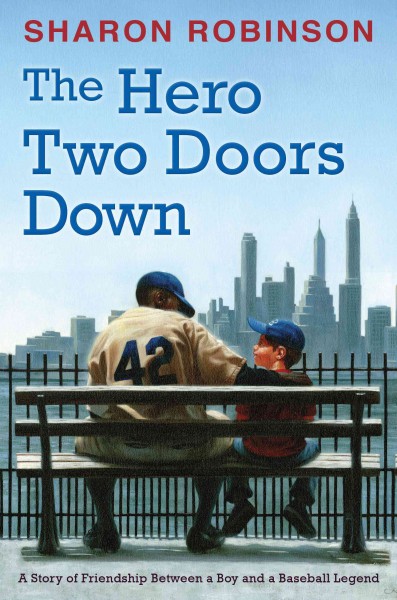 The Hero Two Doors Down

Written by daughter of baseball legend Jackie Robinson, The Hero Two Doors Down by Sharon Robinson, recounts the historical fiction tale of tumultuous times of global, racial, cultural, and religious unrest in the late 1940s.  Because of its inspirational messag 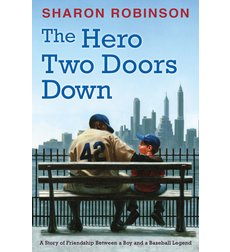 e about the need to depend on faith, family, and friends during the worst of times, contemporary readers will find this story of friendship and unity especially relevant as Martin Luther King, Junior’s 87th birthday approaches.

In 1948, Steven Satlow is eight years old, and a train ride to Ebbets Field costs five cents each way.  Because Steve is the shortest kid in his class and a passionate Brooklyn Dodgers fan, he struggles to handle verbal attacks without his fists or by return name-calling, neither of which solves problems.  Steve’s hero is Jackie Robinson, who, in 1947, broke the color barrier in baseball while playing for the Brooklyn Dodgers.  With discrimination and segregation still thriving, when a black family plans to move on Tilden Avenue, a mostly Jewish neighborhood in Brooklyn, many of the neighbors—including the family of Steve’s best friend, Sena—sign a petition hoping to resist change.  But Steve’s parents, Archie and Sarah—themselves descendents of Russian Jews—remember “how horribly history has treated people of the Jewish faith” (35), and are opposed to any kind of discrimination.  In fact, Steve’s parents believe in freedom for all people and teach Steve that people of different faiths, cultures, and races enrich rather than threaten their way of life.

Because of these teachings, Steve grows up with the “heart of a healer.”  Although he is too young to understand war, he leads his classmates in a UNICEF collection to help children who are victims of war—this fund drive connects him to the Arab-Israeli war.

Besides inspiring all readers to defeat discrimination, Robinson’s book also greatly imparts information about Jewish traditions like playing dreidels, giving gelt, celebrating Hanukkah, practicing mitzvah, and lighting the menorah.  Robinson states that many of us have limited exposure to families of other faiths, so prejudice frequently has its roots in fear of the unfamiliar.  Through her characters, Robinson also teaches us the value of receiving a gift in the spirit it is given and of becoming our best selves by staying focused, setting goals, and not allowing anyone to interfere with making our dreams come true.  Other human truths come through words of wisdom from Jackie Robinson: “A life is not important except for the impact it has on other lives” (190).

With its multiple themes, Robinson’s book is destined to attain status as a classic for young readers.

2015-12-31
Previous Post: We Are the Ants
Next Post: The Borden Murders: Lizzie Borden and the Trial of the Century