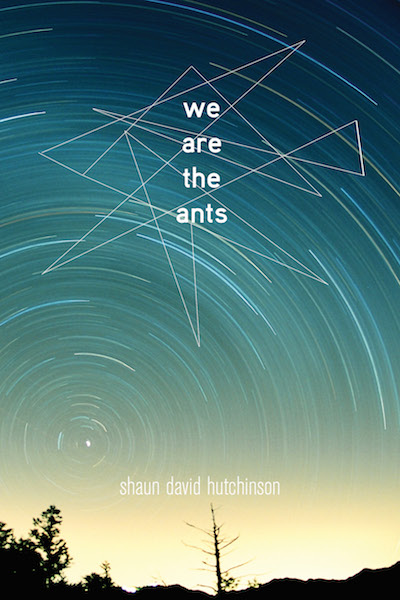 We Are the Ants

We humans are all broken, broken by life’s trials and tribulations, undone by love, fragmented by bullies who shoot holes in our confidence, or traumatized 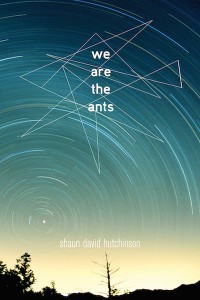 by loss—whether a consequence of death, divorce, or some other life-altering trauma.  These truths unfold  from the beginning line—“Life is bullshit”—of We Are the Ants by Shaun David Hutchinson, a novel that explores both the absurdity of and the grand scheme of the cosmos and of human existence.

Ever since he was 13 years old, Henry Jerome Denton has been abducted by aliens, whom he calls sluggers.  The abductions always begin with shadows and end with his being deposited—often naked—far from his home.   Few people in Calypso, Florida, believe Henry’s stories of being some slugger kid’s science fair project, and he is branded with the nickname: Space Boy.  But Jesse Franklin did believe, and now he’s dead.  Henry, who loved Jesse, is left asking: Why did Jesse—lover of anything loud and manic—kill himself?

Contemplating both his existence and the meaning of life, Henry is now sixteen and attempting to cope with loss, identity issues, and bullies as he struggles to live After Jesse.  Seeking the horror in Jesse’s life that drove him to suicide and searching for a compelling reason to go on living provide the framework for Hutchinson’s book.  The sluggers have given Henry the choice to press a button that will save the world from destruction, but lacking resilience and focused despondently on all that makes life unbearable, Henry thinks “there are some pretty compelling reasons for wiping the earth clean and starting over” (127). Henry blames himself for Jesse’s death, thinking he didn’t love Jesse enough or that he loved him too much, but the remembering alone hurts: “A person can become part of you as real as your arm or leg, and even though Jesse is dead, I still feel the weight of that phantom limb.  I have a thousand amazing memories of Jesse, but his suicide is leaking into those recollections, poisoning our past.  I can hardly remember him without hating him for taking his life and leaving me alone in mine” (124).

As Henry searches for life’s meaning After Jesse, he also wishes for escape, which he finds temporarily in an abusive relationship with Marcus McCoy.  Marcus’ behavior exemplifies twisted, bully logic, the truth that popularity is teenage heroin, and that money insulates a person from many of life’s hardships.  Marcus drags Henry on a path of humiliation and suffering as he worships the rich-boy trinity: booze, drugs, and meaningless sex.

Without the support of his two friends, Audrey Dorn and Diego Vega, and without the support of his science teacher Ms. Faraci, Henry may well have drowned in the gloom of grief.  All three themselves have been broken, so they help Henry to rethink life’s purpose, “to remember the past, to live the present, and to write the future” (363).  He also siphons hope from Zooey, his brother’s girlfriend, who has named Henry to be her unborn baby’s godfather and who tells him, “Milk shakes make the world seem less shitty” (207).

Besides writing a story of hope, love, friendship, and survival, Hutchinson also explores multiple other themes and morals:

In addition, Hutchinson develops some stellar analogies connecting humans to stars and to light and  embellishes the crucial role that art—whether music, painting, or writing—plays in helping humans cope  with and heal from pain.  When we’re inundated by pain, art provides a channel for communication, as well.

With this book Hutchinson also explores the power of memory.  Just as Henry is robbed of hope, his Nana is being robbed of her memories through Alzheimer’s.  The raw piano notes Nana plays communicate “every fear and horror her mind [can] conjure.  The music show[s] us what she [cannot] say.  All her emptiness and despair.  The hollowness of her mind without her memories” (173).  From Nana, the reader learns that memories keep us sane; that we hoard and savor them for when we lack the energy to go out and make new ones.  Our memories not only comfort us when we visit them, they also define who we are.

For its focus on science and human survival, We Are the Ants by Shaun David Hutchison reminds me of Libba Bray’s Going Bovine; its aliens element and a young man’s opportunity to save the world bring to mind Ender’s Game by Orson Scott Card; and because of its support narrative and survival story targeting anyone who has considered suicide, it evokes recollections of David Levithan’s book Two Boys Kissing and of Richard Peck’s Remembering the Good Times. Ultimately, Hutchinson’s deeply philosophical and richly descriptive prose informs readers that when the days are darkest, we need to find something to give life meaning, to “latch on to happiness wherever [we] find it” (103).  He also reaffirms that we are the author’s of our own life stories and that we have the power to revise for a better ending, and “because we are the ants, we’ll keep marching on” (451).