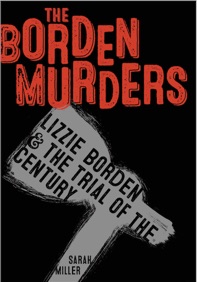 The Borden Murders: Lizzie Borden and the Trial of the Century

I recall growing up and jumping rope to the rhyme:  “Lizzie Borden took an axe, gave her mother 40 whacks.  When she saw what she had done, she gave her father 41.”  I never questioned the veracity of the rhyme, and after reading the narrative nonfiction account, The Borden Murders by Sarah Miller, I am intrigued anew by the susceptibility of public opinion to be shaped by sensationalized media messages and swayed by rumors.

While Miller’s book serves mostly to recount a series of suppositions and scandal-mongering newspaper accounts of the unsolved mystery of Abby Borden and Andrew Jackson Borden in Fall River, Massachusetts, on August 4, 1892, it also serves as an interesting testament to the psychological need for closure that leads to closed-mindedness.  The human mind has such a strong desire for predictability and a preference for order and structure, that we find discomfort in ambiguity.  In order to end this discomfort and to regain some measure of sanity, we settle on a decision, even if that decision is not the most accurate or the best answer.   It is this need for closure that leads us instead to jump to conclusions.

With so many theories, tips, and clues suggesting Lizzie Borden’s guilt, nothing satisfies us that she is innocent.  But with all of the evidence being circumstantial and with no tangible link between Lizzie and the crime, we have no reasonable cause to believe she committed murder, either.  One hundred and eighty nine years after Lizzie Borden’s death, some are still seeking answers.

In her book, Miller brings Elizabeth Borden to life as a strong-willed and forth-right woman, one who led an honorable life as a member of the church with a strong interest in charitable work.  During an era when women were thought to be weak, dainty, and emotional, a straight-forward woman who speaks her mind and remains composed and self-controlled may indeed have been considered cold and calculating, capable of murdering her parents in cold-blood.  During the inquest, Lizzie’s words do not betray guilt, but they do almost nothing to suggest her innocence, either.  Her conflicting testimony, inability to recall minute details, and actions that hint at a cover-up also suggest guilt.

From the investigation, the inquest, and the arrest to the preliminary hearing and the grueling, thirteen day trial, the newspapers carry stories.  Many reporters describe Lizzie Borden’s “calm self-possession as wonderful, dignified, and remarkable, [while others use] words like strange, indifferent, unfeeling, and abnormal” (122).  Those who believed in her guilt needed her “to look the part of a coarse and brutish killer.  Those who favored her innocence required a dainty, delicate lady.  Lizzie Borden was neither” (163).  Because the newspapers in the late 1800s were largely responsible for documenting and providing a chronology of events, we see Lizzie Borden through a haze of headlines and human perception and misconception.  Borden’s character clearly suggests that outward appearance does little to indicate personality—a truth that still holds today.

Another abiding truth is that the mysterious murders of Abby and Andrew Borden seem without a motive.  Whether Lizzie Borden is guilty or innocent, the reader must decide, because Miller writes a book that opens readers to both possibilities.  She achieves a delicate balance between fairness and humanity.