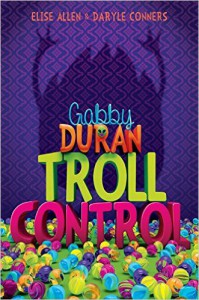 Friends, family, babysitting, and playing the French horn comprise the interests of twelve-year-old Gabby Duran.  To Gabby, every child is a puzzle-locked box that can be solved: “If you [are] interested in them enough to figure out the puzzle, you [can] open that box and completely connect with the person inside” (44).  That philosophy, and her aversion to the words strange or disgusting as descriptors for children and their behavior, make her a superior associate for the Association Linking Intergalactic and Earthlings as Neighbors (A.L.I.E.N).

Working for A.L.I.E.N. as a Sitter to the Unsittables, Gabby encounters a troll family and their son Trymmy, who—just like her ten-year-old sister Carmen—“isn’t huggy or hand-holdy, loves games with a lot of rules, is hyper-crazy smart and . . . so super-logical [he] can figure out riddles in [his] sleep” (181).  But when Gabby breaks A.L.I.E.N. rules, she loses her job as a sitter and fears she will never be able to bring happiness to another alien child.

Because letting people down isn’t her strong suit, Gabby is desperate to make amends and to get her job back, even at the risk of getting her memory erased.  But she also has obligations to her detail-oriented sister, her creative caterer of a mother, and to the fundraising efforts of Brensville Middle School’s Help Our Orchestra Travel (H.O.O.T.) group. H.O.O.T. Honcho, Madison Murray, who is angry with Gabby for shirking her duties, tries to bully Gabby into compromising her belief that her babysitting charges take priority.

To help her save H.O.O.T., her job, and the safety of alien children from forces who wish them harm, Gabby enlists the help of her friends Satchel Rigoletti and Stephanie Ziebeck (Zee).  Their efforts involve secret missions, suspicious character encounters, transportation on a “surfboard with four sets of skateboard wheels and a jet booster on the back” (107), robotics, and rescue of a “stolen” collector’s cookbook worth thousands.

Filled with mystery and elements of fantasy, Gabby Duran Troll Control is the second installment in a series by Elise Allen and Daryle Conners.  The book promises not only to entertain but to teach tweens about the value of acting out of great love and respect.