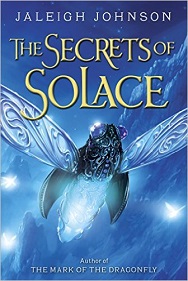 The Secrets of Solace

In The Secrets of Solace, Jaliegh Johnson brings the fantasy World of Solace to life with maps, vivid descriptions, relatable conflicts, and characters to whom the reader can form a connection.  Although the target audience for Johnson’s book is tween readers, anyone who finds fascination in archives and museums will likely consider this t

Because the Winterbocks died from a pestilence when their daughter Lina was nine years old, she has been entrusted to the care of Zara, a senior archivist in the mountain stronghold of Ortana—an underground community of rocks and caves.

Besides humans, Lina’s world is populated by shape-shifting chamelins, a sarnun species that communicates telepathically, and creatures like lumatites and carnelian cats.

As an archivist’s apprentice, Lina is practicing the mission of all archivists: to preserve artifacts—whether they be Floral, Faunal, Technological, Language-related/Literary, Cultural, or Medical—so that people can learn about other worlds and other times.  But Lina is more of an explorer, an adventuresome sort who seeks to solve mysteries and to discover the hidden secrets and the wonder in the artifacts left behind from other cultures.  In pursuit of this mission, Lina often goes where she is off-limits—eavesdropping or hiding.  On one occasion when Lina appears where she is not supposed to be, a mysterious boy runs into her.  She discovers that his real name is Ozben and that he has a secret.

Lina and Ozben trade a secret for a secret and join forces as they engage in the excitement and uncertainty to solve the mystery of an artifact that Lina has named Merlin—a flying ship that reminds her of a type of falcon.  On their mystery-solving journey—fraught with frustration, setbacks, and lonely nights—their bond develops into a friendship.  Feeling abandoned in a world at war, the two youth are looking for a way to make themselves stand out, to be important, to make a contribution.

While Ortana struggles to remain neutral in a war where both sides are to blame, where greed and cruelty provide motivation, and where assassins lurk, readers learn—through Lina and Ozben’s struggles—about the value of cooperative relationships.  The lumatites, which evolved to produce light in exchange for nutrition provided by humans, teach the tweens that bonds involve connection, illumination, and mutual interdependence.   Although Lina and Ozben learn that friends make us feel less alone in the world, they also learn that trust is a complicated affair and that things we don’t understand command respect and care.