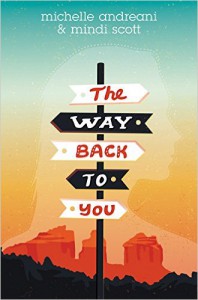 Similar to Walk Two Moons by Sharon Creech, The Way Back to You by Michelle Andreani and Mindi Scott uses a road trip as a metaphor for the journey survivors take as they learn how to cope with death and loss.

After sixteen-year-old Ashlyn Montiel dies in a freakish bicycle accident in Bend, Oregon, her boyfriend—Kyle Ocie, a baseball player who doesn’t believe in the afterlife—and her best friend—sassy, smart, cheerleader Claudia Marlowe—have difficulty overcoming the shock of having Ashlyn ripped from their lives.  Realizing they will never be with her again not only affects how the two live; the idea of going on without her actually paralyzes them.

Struggling with depression, Kyle uncharacteristically hopes to find peace in a church.  In the church parking lot, he finds a stray, glossy black kitten with Ashlyn’s 7Up can-green eyes, and names the kitten Arm, in memory of Ashlyn Rose Montiel.  He also decides to give up baseball.

Although Claudia, aka Cloudy, is doing a better job of hiding her grief from others, when she learns that Ashlyn’s parents have been conversing with the recipients of Ashlyn’s donated organs, she suggests that Kyle accompany her on a road trip to an out-of-town play, rather than telling him the truth about her plan: to visit the recipients as a way of reconnecting with Ashlyn.  The trip down the west coast into Southern California and then to Arizona and Nevada becomes a means of both escaping from painful circumstances and of confronting their grief.

In their poignant novel, Andreani and Scott accurately articulate the feelings of two adolescents who experience the misery, rage, and regret that loss engenders.  As they go through an obstacle course of emotions while preoccupied by the briny smell of the Pacific Ocean, the otherworldly beauty of Arizona’s natural architecture, and the glitz of Las Vegas, they talk through their feelings and realize that losing a person doesn’t mean leaving that individual behind; it means finding new ways to keep the beloved among the living.  And although “memories aren’t everything, they aren’t nothing, either” (33); a memory can be a comfort that we keep nearby, not something to hide from.  After all, a love like the one that Kyle and Cloudy shared with Ashlyn doesn’t get left behind or forgotten.  The teens also learn lessons about how love and selflessness can bring hope after tragedy and about how bottling emotions or walling them away when we don’t want to deal with them are practices that prevent healing.

As the novel alternates between Cloudy and Kyle as narrators, the reader further recognizes that while we can read some thoughts, others are completely unknown or incomprehensible to us.  Besides this message about perspective taking and perspective making, we learn about the brain’s ability to rewrite memory.

But the novel delivers more than a message about how grief turns from rage, misery, and regret to lightness and acceptance.  It is also a story of the human condition and how “plans hardly ever behave like they’re supposed to” (106).  With an allusion to John Gotti, the infamous mobster and crime boss, the authors share another human truth: “We lie when we’re afraid” (307).

The Way Back to You is also a sports story, about how athletics require persistence and commitment, about how exercise clears the mind, and about how being capable on our own is important, but having the right team makes all the difference.  All of these truisms apply to life, as well, with relevant analogies to family and friends as teammates.  In an especially poetic passage, the authors describe how sports become addictive for athletes.  It’s not just the self-satisfaction and the competition that contribute to the high: “When you’re quick enough, when your body’s positioned right, . . . your team gets the out, and there’s nothing like it.  You want to do it again and again.  It feels so fluid and so right to be able to create perfection in this series of split-second catches and throws” (227).

While the book’s poignant plot has potential to squeeze tears from any reader’s eye, it has a particularly powerful effect on a reader who has lost a close friend or family member, who has experienced mind-numbing trauma, or who has made the decision to be an organ donor.  I full-out sobbed at moments during my reading, so readers, you’ve been forewarned, but the book offers rich messages for coping without minimizing the severity of the pain that accompanies loss—whether from death, divorce, a friendship break, or some other incapacitating event.  The book’s descriptions of Sedona, Arizona, and the surrounding desert landscape were also especially nostalgic for me, a former resident of the area.