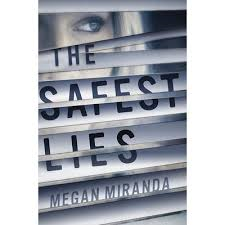 By: Jacquie
In: Mystery & Suspense (YA), Young Adult Book Reviews

Kelsey has always been taught to view the world as dangerous. Her mother was the victim of a brutal kidnapping seventeen years ago. When she was finally able to escape, she vowed to stay indoors and raise her daughter, who she was now pregnant with.

Since her mother’s kidnappers were never caught, Kelsey learned from a young age to protect her identity and to always be cautious when she left the house. To protect them, Kelsey’s mother built their home into a protected fortress complete with iron bars, video security, and bulletproof glass windows. To enter the home, Kelsey must enter a secret code. All of these security precautions helped Kelsey and her mom feel safe from the outside world.

Kelsey’s mother always wanted her daughter to have a normal life. Kelsey attends a public high school and has a job at the local library where she works after school. While she has a couple friends (mainly her therapist’s children), she mainly keeps to herself. Everything seemed to be going well for Kelsey; she was following safety protocol and protecting herself…until one tragic night.

As Kelsey was driving home from work, she found herself in a serious car accident. She was stuck inside her car, which was dangling off a cliff. An acquaintance from school, Ryan Baker, was first on the scene. He was a volunteer firefighter and saved Kelsey from the wreckage. This lifesaving endeavor created publicity, which is something Kelsey has been trying to avoid her entire life.

When Kelsey was finally released from the hospital a few days later, she comes home to her worst nightmare. Something is wrong…very wrong. The iron bars and gates are open, the security alarm is off, the front door is open, and worst of all, her mother is missing. With no note or clues, Kelsey fears the worst. The men who kidnapped her mom seventeen years ago are back. Kelsey now has to face all her fears and find out what has happened to her mom. Will Kelsey’s mom be rescued? Will she even be found alive? Are there other secrets from Kelsey’s past that she is unaware of? These gripping questions will linger on the reader’s minds as they investigate and discover the truth about Kelsey’s life.

The Safest Lies author, Megan Miranda, keeps her readers guessing and questioning what will happen next. This novel is a quick page turner and fills the reader with mystery, adventure, and drama. The Safest Lies is recommended for young adult readers, ages 12-18.