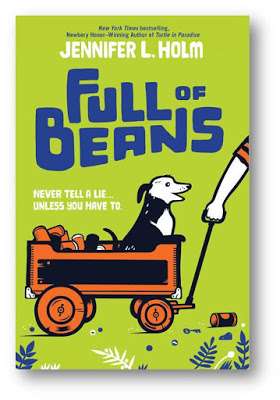 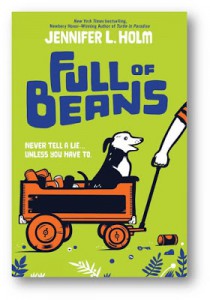 Three-time Newbery Honor winner Jennifer Holm shares a historical fiction account in Full of Beans about life during the Great Depression in Key West, Florida, where there was a tradition of nicknaming. Conchs, for example, were those who often ate conch chowder.  Ten-year-old Beans Curry is a Conch who mines the garbage bins for milk cans to recycle for coins so that he can watch his favorite Shirley Temple films or buy coconut ice cream since times are tough and money is scarce.  Because he’s “a good boy,” however, his money often purchases deworming medicine for his brother Kermit or hand cream for his mother, whose hands are chapped and raw from washing other people’s laundry to pay the bills.  Seeing the luxuries of wealth elsewhere, Beans wishes to be Daddy Warbucks and dreams of living in a fancy mansion and playing the accordion.

When the notorious rum-runner Johnny Cakes asks Beans to work for him, Beans trades being good for being tough and hard.  Although Johnny turns out to be the criminal version of a mother hen and Beans’ new life of crime keeps him from smelling like garbage, Beans must accept the consequences of his decision to “live the easy life.”

Beans also must face the facts: that life is hard, that adults lie, and that the meanest grown-up in Key West—his grandmother Nana Philly—might be the only one telling the truth.  Beans further realizes that in the movies, fights are easy to settle with fancy footwork and a duel in which someone emerges a clear winner.  In real life, though, conflict is never so cleanly settled or problems so neatly resolved.

Tucked into its post-World War I woefulness, the book communicates some memorable sensory moments in which readers can virtually taste Cuban specialties like arroz con polo (chicken with rice), garbanzo soup, bollos (black-eyed pea fritters), flan (egg custard), and ham sandwiches; smell the kerosene-soaked rags, burning to fend off mosquitoes; feel the pinch of poverty; and hear the clink and tick of marble-playing.  Mibster is what a marble player is called, and Beans and his gang of friends are called the Keepsies because they have won so many other kids’ marbles that their pouches are filled with cat’s-eyes, aggies, clearies, milkies, steelies, glassies, and onionskins.

In addition to the story of its residents, Holm retells the tale of Key West, a city strangling in the depths of the Depression.  With its tax base shattered and a majority of its residents on welfare, the city is on the verge of collapse.  Enter Julius Stone, Junior—wearing Bermuda shorts and a mustache—sent from Washington, D.C to transform the decrepit Key West into a vacation destination. The residents of Key West are suspicious of placing its fiscal future and the fate of their home in the hands of the newly formed Federal Emergency Relief Administration, one of President Franklin Roosevelt`s New Deal programs.  Yet, Stone, the silver-tongued visionary, solicits the town’s support with Beans’ help, as they build a tourist resort to which the people do come.

Like many non-fiction books, Full of Beans provides back matter that imparts the history that helped to shape Holm’s story and its colorful characters.  With a human story that makes us care, readers will learn much about Depression era history.