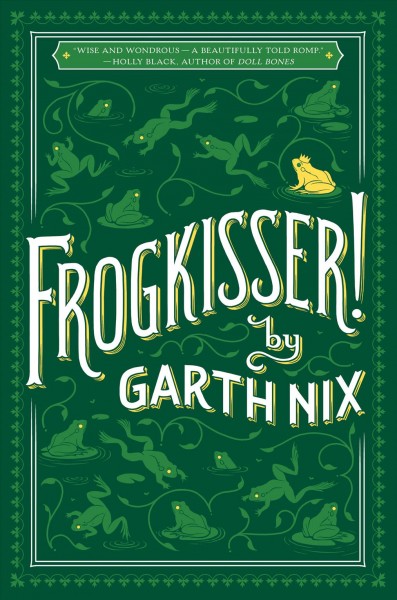 By: Donna
In: Action & Adventure (YA), Sci-Fi & Fantasy (YA), Young Adult Book Reviews
With: 0 Comments 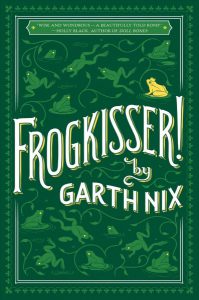 Readers of both fantasy and adventure will likely label Garth Nix’s recent release, Frogkisser, an enjoyable read.  The book’s main character, thirteen-year-old Princess Anya, takes the spotlight with her plucky and occasionally petulant attitude.  Unaware of her privilege, Anya is content in the library with Gotfried, a librarian who has had some magical education and is a useful resource for Anya, who has a strong interest in magic.  However, when her evil stepstepfather, Duke Rikard starts transforming people, Anya’s conscience and her sister promise to Morven to find Prince Denholm, who is now a frog, alter the course of her life.

Allied with other sorcerers, the duke has grown into the most evil, scheming, and dangerous of sorcerers and is intent on taking the kingdom of Trallonia from Morven and Anya.  Before the Duke can send Anya away to school and complete his usurpation plans, Anya must escape.  Although she isn’t prepared to set right the world gone rotten, having never been beyond the borders of her small kingdom, Anya discovers that in order for her to keep her sister promise and return Denholm to his human form, she will need the ingredients to Transmogrification Reversal Lip Balm so that her kiss will undo the Duke’s spell.  Tanitha, the leader of the Royal Dogs—who themselves are mostly immune from transformation magic—tells Anya: “The time has come when you must go on a Quest” (46).

Searching out the ingredients for the lip balm will be only one purpose of Anya’s Quest; she must also find allies who can help her defeat the dark and dangerous Duke Rikard.  Although Anya knows a few useful spells, and Ardent, her companion, is a trained fighting dog with a brave heart, this Quest will present a myriad of dangers: robbers, assassins, spies, monsters, and strange, magical creatures like fighting weaselfolk.  Given the risks, Anya and Ardent may well both end up dead, enslaved, or seriously injured.

As the two journey, they pick up companions along the way, companions like Shrub, a boy thief transformed into a bright orange newt, and Smoothie, an otter transformed into a human hunter.  Anya’s responsibilities also increase.  When the questers encounter Roberta, the leader of the Association of Responsible Robbers; Dehlia, a raven who is the last surviving warden of the High Kingdom of Yarrow; and the Good Wizard, who claims she can’t interfere directly in Anya’s quest, they all hint at Anya’s duty and responsibilities.  Although Anya simply wants to collect the lip balm ingredients and kiss the frog who was once Denholm so that she can go back to studying in the library, she quickly learns that everything seems to work better if a princess is involved, provided that the princess is her.  While she agrees that power is best limited and that the common people often don’t get what they deserve, she feels ill-equipped to restore the High Kingdom and to honor the rights and obligations in the All-Encompassing Bill of Rights and Wrongs and the Laws Set in Stone.  After all, she’s not the kingdom’s heir, and she’s only a young girl who is now faced with an increasing number of transformed who require a kiss for transmogrification reversal!

With Frogkisser and its captivating characters, Australian author Garth Nix has penned a book that is both serious and funny.