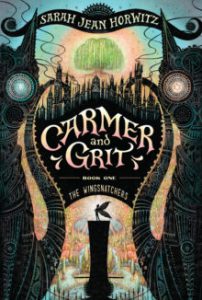 Book One in The Wingsnatchers saga, Carmer and Grit by Sarah Jean Horwitz, will likely appeal to readers who enjoy fantasy adventure stories and steampunk settings.  Blending just the right proportions of science, action, and magic, Horwitz creates an engaging tale with lessons about self-discovery, the value of perseverance, the environmental impact of mankind’s industry and inventions, and the importance of achieving a balance for harmonious coexistence.

The key characters in this tale are thirteen-year-old Felix Cassius Tiberius Carmer III, who is Antoine the Amazifier’s apprentice; and Grettifrida Lonewing, a fire faerie who cuts quite an intimidating figure for one only five inches tall and prefers the name Grit.

With his curious and creative mind and a penchant for tinkering, Carmer hopes one day to become a great magician.  Having spent his early life in an orphanage, Carmer has no memory of a family besides the Amazifier and Kitty Delphine, his assistant.  But unless they can win a place at the Seminal Symposium of Magickal Arts, their family will need to disband for lack of funds.  Not good at confrontation nor gifted with communication, Carmer struggles to express or to defend himself.  Many adults mistranslate his oddness and curiosity for insolence.

Grit, on the other hand, is the toughest fairy in the Arboretum.  She has a forthright attitude and a survivalist’s approach to life.  Born with only one wing, Grit can’t fly or make faerie dust, so she feels alienated, different, and marginalized.  But as heir to the faerie kingdom, she is also privileged, another feature that sets her apart.  Because Grit wishes more than anything to be free, she enjoys riding on Dusten, the owl, so she can leave behind frilly gowns, her queen mother’s disappointment, and any expectations befitting a princess.  On one of these flights, she encounters Carmer, and they form an unlikely but mutually beneficial alliance.

Set in the city of Skemantis, before electricity is available to everyone, the novel reveals how technology and magic are not easily separated.   This setting enables Titus Archer and Titan Industries to mesmerize locals with inventions like Hyperion, a machine capable of synthesizing energies that already run throughout the earth and amplifying them with special composites into useable electricity.  Because Titus realizes that humans typically see what they expect to see and not what actually is, he wears a mask and works like a man behind the curtain, calling himself the Mechanist and using an “army’s worth of faerie magic” (100) in an effort to win the title: Greatest Magician in the World. But Carmer and Grit are determined to expose him for a murdering fraud, and they might even succeed—with allies like Madame Euphemia de Campos and her talking puppets, Free Folk, and other magical creatures.

In their plot to expose Archer and to uncloak the mystery of disappearing faerie folk, Wingsnatchers, and mechanical attack cats, Carmer and Grit are plagued by mistakes and bad breaks. Despite numerous obstacles and various surprises, the two discover that shortcomings and challenges don’t need to stop them; that just because they are different doesn’t mean they can’t make a difference.

In this debut novel, Horwitz captivates readers with her clever allusions, intriguing characters, and engaging plot.