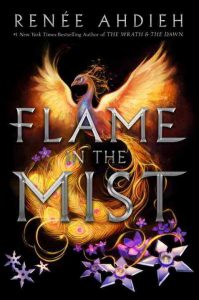 After The Wrath and the Dawn, it’s obvious that Renee Ahdieh has a talent for illustrating beautiful worlds. In Flame in the Mist, she once more delivers a setting that sucks the reader in from the very first page. The setting this time is ancient Japan, a land full of fallen Samurai, bloodsucking trees, and powerful alchemists. The protagonist, Mariko, is drawn into this world after her convoy is attacked in the depths of Jukai forest. As the betrothed to a prince, Mariko doesn’t expect to be threatened by a band of mercenaries, but she soon realizes that everything she’s grown to expect no longer applies. Hiding her gender, Mariko infiltrates the Black Clan with the sole purpose of discovering the truth behind her assassination attempt and proving to her family that her value doesn’t depend on her marriageability.

The amount of research that Ahdieh did in order to establish her setting is readily apparent through the lush details of the world she’s created. Ahdieh makes sure to use traditional Japanese ways of speech including careful regard to hierarchy and formality. She beautifully describes kimonos, imperial palaces, and tea ceremonies with an attention to detail that faultlessly transports the reader to ancient Japan.

Some themes like female independence and the power of cunning over strength are familiar from Ahdieh’s previous series. Although Mariko is different from Shazi in her ability to maintain a level head, she shares a lot of characteristics with Ahdieh’s last heroine, including her inability to accept defeat and her fearlessness. Similarly, the romance in this novel develops in much the same way. What starts out as an antagonistic relationship soon evolves into a romantic one. The male protagonist even refers to Mariko with similar expressions to those Khalid uses to describe Shazi in The Wrath and the Dawn.

Other themes that are prevalent in this book are that of honor versus justice, family duty versus personal independence, and logic versus emotion. Flame in the Mist explores how family influences a person’s sense of self and of the world around them, and how this can be both constructive and destructive at the same time.

Although the characters are strong and interesting, they don’t feel wholly three dimensional. This can be attributed to their relative lack of flaws and their almost inhuman fearlessness. Hopefully there will be more character development in book number two.

Overall, for fans of manga, ninjas, or diverse settings, this is definitely not a book you’ll want to miss.