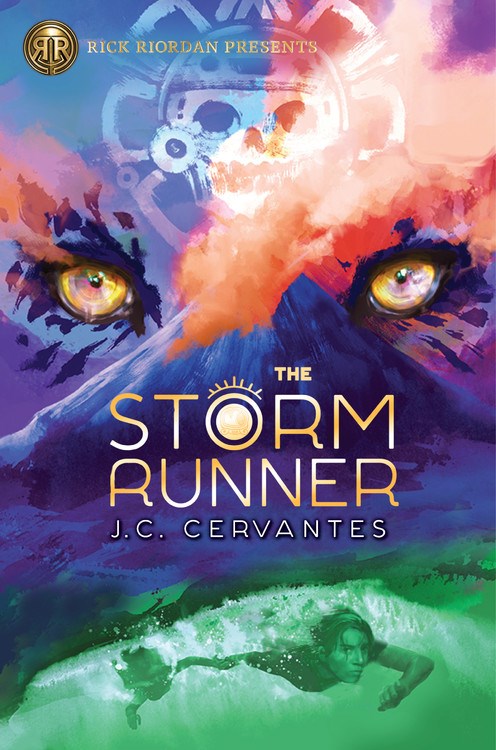 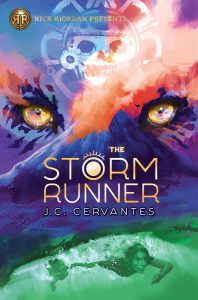 Readers of Roald Dahl and Rick Riordan will likely enjoy The Storm Runner by J.C. Cervantes, a mixture of Mayan mythology, adventure, and magic featuring Zane Obispo and his three-legged dog Rosie.  Rosie is a half-boxer, half Dalmatian who is Zane’s best friend, loyal companion, and kindred spirit.  Together, the two explore the mesas in New Mexico, but their favorite turf is the volcano—aka the Beast—in their backyard.

Thirteen-year-old Zane has one leg shorter than the other, so he walks with his warrior dragon cane, a gift from his mom to give him confidence.  Although his bum leg is a medical mystery that makes him the target of frequent bullying and name-calling, Zane considers himself “a crazy-fast hobbler.”   Still, he yearns to be seen or to be noticed for something other than what is wrong with him.

Zane’s father, who “bounced” before Zane was born, was from Mexico’s Yucatan region, so Zane connects with his dad’s culture through a five-volume set of books about Mexico.  His favorite in the collection is The Lost Myths and Magic of the Maya, a book filled with color illustrations and stories about the adventures of different gods, kings, and heroes.

Hoping to make his shorter leg stronger so that his limp will be less noticeable, Zane often hikes to the top of the Beast, his favorite place in the world—not only for the jaw-dropping view but so that he can walk the rim’s edge.  Here, he learns to be the boss of balancing, a handy skill for anyone who gets shoved around by bullies.

One night while hiking the Beast, Zane and Rosie observe what appears to be an alien pilot crash into the mouth of the volcano.  The following day at school when he is visited by a beautiful girl who is dressed like an assassin-for-hire, Zane is convinced that he has taken a one-way trip to loco-land.  Soon, he discovers that Brooks is a nawal who can shape-shift into a hawk.  She not only tells Zane that as a nawal, she’s naturally loyal—“we’re meant to serve the higher good” (59)—but that he is part of an  ancient prophesy that involves Ah-Puch, the Mayan god of death, darkness, and disaster.

Not exactly the world-saving type, Zane finds himself mixed-up in an ancestral conflict for which he didn’t sign up.  Because doing nothing isn’t an option for Zane, he engages with demon runners, aluxes, and a wide variety of other supernaturals to rescue Rosie, protect his family, and ultimately save the world from a bunch of power-hungry, egotistical gods.

On his quest, Zane discovers the mercurial nature of magic and how no one can “fully gauge its temperament or understand its logic” (73).  Along the way to a final showdown with Al-Puch, Zane learns about his parentage, the truth of his legacy as a supernatural, and the degree to which secrets can be life-ruiners.   To protect his interests, Zane is forced to make various deals and comes to believe that a deal is like thorns that know how to draw blood.

With The Storm Runner, Cervantes has written a book to rival any heroic-journey tale.  Her wish is that readers will see themselves reflected in the pages of her book and be inspired to see beyond their own lives and beliefs to recognize and celebrate others.  Just as Zane discovers and accepts that he’s not normal, readers will hopefully learn the value in loyalty—to self, to family, and to culture.