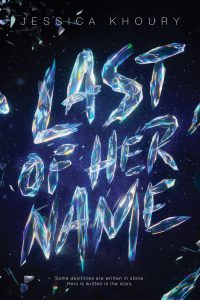 Jessica Khoury’s science fiction novel Last of Her Name features sixteen-year-old Stacia Androva and Clio Markova, two girls who are like sisters.  Possessing an instinctual urge to keep Clio safe, Stacia trusts Clio even when she can’t trust herself.  Their existence is mostly idyllic until the threat of rebellion comes knocking.

A vintner’s daughter on the planet Amethyne, Stacia lives in Afka, a valley town huddled between the hills.  Stacia is a tenacious young woman with a muscular build and mechanics certification.  Appollo Androthenes, aka Pol, is Afkan’s wrestling champion and Stacia’s protector.  The three friends share multiple memories, a trio against the universe.  But when the Red Knights come to Afka, a vityaze army led by Alexei Volkov, Stacia’s world changes forever.

In general, Afkans despise the Grand Committee for promising freedom from the Empire but only bringing tyranny to the galaxy.  Under Volkov’s rule, a military draft is imposed, all broadcasts censored, strict travel imposed, trade restricted, and certain races, like the aeyla, are stripped of their rights.   Volkov, a villain who uses his honey voice and his propaganda face to twist history and to make himself the hero, invades Afka in search of the Firebird, the key to power and galaxy domination.

With the help of Pol, Stacia escapes Afka and Volkov’s grasp, but now, she is a fugitive, running for her life and branded a terrorist princess.  Knowing that The Committee often defaces their enemies by branding them as dissenters, violent psychopaths or insurrectionist spies so they can shoot them without public outcry doesn’t help.  With every part of her past currently suspect, Stacia feels like her life has been a lie, and she questions whether her parents were little more than imperial babysitters.  Now, the only way to save Clio is to become what she was born to be, to step into the role of Anya Leonova, but denying the only identity she has known proves not only difficult but nearly impossible.

As the two flee from planet to planet, hoping to find a solution to their predicament, they meet Riyan Ayedi, a tensor and a type of magician with a terrifying and somewhat unnatural power to manipulate gravity.  When Riyan tessellates, he puts pressure on the threads of the fabric of time, so things around them are naturally pulled in or repelled away.  With his ability to tessellate, Riyan initially imperils the pair but ultimately escapes with them.  With Volkov on their trail, they often act without the luxury of time to work out a plan, so Khoury’s novel reads at a quick pace, laced with action, adventure, and plenty of surprises.

One of those surprises is Stacia’s discovery that she is the custodian of the Leonov legacy, a protector of the Prismata, the source of all the galaxy’s energy.  Prisms are the foundation of current civilization, the reason the planets are united, and the source of technologies like warp drive and cross-system communication.  The original discoverers of the Prisms, the Leonovs were the only people in the galaxy who knew where they could be found.  This exclusive knowledge was the base of their power and the secret upon which they established an empire.  Although Stacia is content to pass on this power, she realizes she has unwittingly become the pawn in a plot to rule the galaxy.  Whoever finds the Prismata will control everything.  So, Stacia is not just a lost princess, she’s the key to the greatest weapon in existence.

Trapped with her thoughts and memories, a torture she is desperate to escape, Stacia yearns to simply return to the way things once were.  Despite Riyan’s recitation of the mantra, Imper su, imper fata—if you control yourself, you control your fate—Stacia realizes much of life lies beyond our control.  She also realizes that it’s impossible to find the way back to where we once were, and maybe we’re not supposed to go back, to obsess, to imagine, and to wonder about what could have been different.  There is no rewind button on life; we have no choice but to move forward and attempt to repair the rents in life’s tapestry.

Tucked in the pages of Khoury’s book lie many truths about life and human nature.  With the help of Mara Luka, a space craft pilot with similar motivations, Stacia learns that we are often motivated by love, and seeing a loved one get sick—to the point that they are no longer themselves—might inspire us to run away because it hurts to stand by helplessly and watch someone we love become someone else, always in pain and misery.  So, to keep from shattering, we tell ourselves lies and ask ourselves whether we become monsters so the ones we love don’t have to.  After all, even our enemies are people with families and homes and dreams.  Stacia can’t imagine using people like game pieces, discarding the ones she doesn’t like with ruthless efficiency.

Along with Stacia, the reader wonders about the impossibility of a path to peace and whether peace is born from trust, a trust that someone will do the right thing when given the guidance, power, and freedom.  We also wonder whether emotional experiences are a different sort of genetic code, one that binds us and makes us who we are.

Although set in a galaxy far, far away, where Alexandrine is not only the center of trade, technology, and learning but the largest of the Jewel planets and the capital of the Belt, readers will see many parallels to Earth and its war woes and scientific questions.