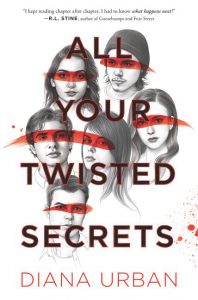 Set in upstate New York, All Your Twisted Secrets by Diana Urban is part psychological thriller, part mystery, and part realistic fiction, and the sum of those parts is somewhat terrifying.

Primarily telling her story from the perspectives of six Brewster High School students, Urban explores human psychology: What we’re capable of when we’re desperate, how words can be deployed as weapons, the consequences of prioritizing one’s dreams over people, and the tragic effects of bullying, lying, and manipulation.

Under the pretense that they have each won a scholarship, six young adults are lured to the Winona Room of the Chesterfield. When they discover that the award dinner is a ruse and that they’re trapped with a ticking time bomb, a syringe of lethal poison, and directions that they must choose one of the group to die before the bomb explodes, killing them all, panic ensues.

Who deserves to die: Amber Prescott, an orchestra geek who dreams of producing epic movies and television scores and whose keyboard, violin, computer, and music make her whole? Scott Coleman, the class stoner who sells Ritalin to his classmates and who is the self-proclaimed “director of the give- zero-fucks club” (13)? Robbie Nelson, a baseball jock seeking to secure his father’s attention with success on the playing field? Priya Gupta, a non-diabetic hypoglycemic, loner, and aspiring magician who is shy but with a predilection for dangerous boys? Diego Martin, an adopted child who is a brainiac and inventor on track to be class valedictorian? Or Sasha Harris, a boisterous, self-confident queen bee and director of the drama club who has a manic drive to excel?

Five of these teens are over-achievers who feed off of each other’s intensity. As they navigate life’s stresses and obstacles—one of which is self-doubt, believing they’re not good enough—they come to discover that plans don’t always succeed and that mistakes don’t define us, despite how others often use them as measuring sticks.  Unaware of the fallout when they make decisions or follow an opportunity, the teens are forced to confront the reality that life is not lived in a vacuum and offers no guarantees; our choices and ambitions affect others.

Trapped and driven to the depths of insanity, the teens claw frantically at rationality and cling desperately to common decency as they fight for what each believes is right, but eventually they give in to their basic survival instincts.

Urban’s book invites readers to perform some self-reflection as well as some deep thinking about future paths, the consequences of our decisions, the pain we potentially cause others to get our way, and the effects of secret-keeping.  The conflicts in this novel force us to confront the fact that we all have hopes and dreams of our own—some may be more ambitious than others, but we each have the right to pursue them.  Just because we don’t know a person or place the same value on that person’s dreams doesn’t make those facts any less true.

As Urban peels back the layers of each individual’s motivations, readers will likely experience some windows, some mirrors, and some revolving doors before reaching the bombshell conclusion.  Included among the story’s several morals are the ideas that we each have to own our decisions and accept responsibility for the consequences of our actions.  Because of inevitable mistake-making and causing hurt to others, we will have to set right certain wrongs by revising our behaviors and doing better next time.