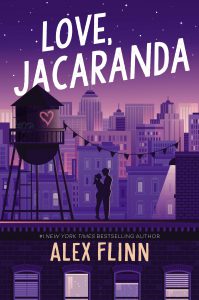 Amid the COVID-19 crisis, I needed a feel-good book, and Alex Flinn’s Love, Jacaranda did not disappoint.  Written in one-way email correspondence, almost like a diary, Flinn’s book performs some genre-bending in that it is realistic fiction sprinkled with mystery and romance.

Named for the tree that heralds springtime in Southeastern Florida, Jacaranda Abbott bags groceries at a Publix supermarket.  Because she loves to sing and to bring joy to others, she performs for Mr. Louis, one of her favorite patrons. Chorus has always been the best part of her school day, since it is “sort of like a little vacay right in the middle of school. It’s when all the bullying and craziness about who has the better sneakers or the less-nasty backpack stops, and we all sing together in harmony” (9). Singing is the one thing in which Jacaranda takes comfort and pride.

When her supermarket performance video goes viral, Jacaranda and her talent are discovered by a wealthy gentleman who wishes to remain anonymous but serves on the board of a private educational foundation.

In the foster care system because her mother is in prison for vehicular assault, Jacaranda is offered a place at Midwestern Arts Academy, a private boarding school in Michigan where she will study musical theater.

Elated at this opportunity and wanting to be special, Jacaranda leaps over the socioeconomic divide and finds herself on the side of advantages that money can buy.  However, she also discovers that she may not belong among these wealthy, privileged, and entitled youth who have had more opportunities, schooling, and lessons in the arts.  After all, experiences are expensive.  With Eliza Doolittle in her soul and living among ‘haves’ when she’s a ‘have not,’ Jacaranda wonders whether her talent will be enough to enable her to keep her scholarship.

In order to conceal her past and her roots, Jacaranda adopts the personality of Jackie, telling everyone that her parents are overseas to explain why she can’t go home for holiday breaks. Leading a Witness Protection Program-like existence, Jackie throws herself into her education, trying to compensate for her ignorance and her deprivation of privilege.  Nearly every day, she writes an email of gratitude to John Smith, her benefactor, thanking him for sponsoring her and giving her this opportunity to excel while also wondering if this is an investment that she can ever repay.

Because Jackie has no one else to confide in and with whom to share secrets like having her first boyfriend and receiving her first kiss, Mr. Smith becomes her confidante.  Although Jackie misses her mother and yearns to share these aspects of her life, she doesn’t miss her mother’s addictions, her boyfriends, and her irresponsible behavior.  In the absence of being able to guess Mr. Smith’s identity, Jackie pictures her benefactor as “one of those old guys on the Supreme Court” (122).

One of Jackie’s biggest competitors in musical theater is Phoebe Pendleton-Hodgkins, a suite-mate who bullies others.  With a glorious voice, Phoebe is talented but disliked.  In fact, her enigmatic character adds another thread of mystery to the novel as the reader wonders whether her stage fright and embarrassment are real or just an act to get attention.  In Jackie’s opinion, Phoebe is all the scary things: talented, beautiful, and rich. But Jackie is motivated by haters and decides she’s not fighting against her classmates but taking on the mission of spreading music and theater to the world.

Jackie’s relationship with Phoebe grows more complicated when Jackie falls for Phoebe’s cousin, John Jarvis Pendleton III, a philanthropist and computer genius. The two share an uncanny connection—comforting one another about their insecurities and sharing their vulnerabilities.  Jarvis tells Jackie: “When we’re given a gift, we have the responsibility to understand its value” (227) and to share it with the world.  However, the two are also keeping secrets from one another, secrets that may shatter their relationship.

In addition to these plot threads that keep the story moving forward at a comfortable pace, Flinn shares some interesting lessons.  While the socioeconomic divide provides plenty of discussion material, so will other thematic threads, such as how our reality, our perspective, or our picture may not be like everyone else’s.

Readers may also find intriguing the premise that public schools don’t value the arts.  At one point Jackie declares, “I WILL DIE IF I HAVE TO GO BACK TO REGULAR SCHOOL. . . . It’s like the schools don’t care if their students have souls, as long as we can feed ourselves and not become a burden to society” (127).  That premise begs to be tackled by critical, creative, and curious thinkers!  As do these notions:

Flinn further shares key facts about Andrew Carnegie, who not only “came from nothing and became the richest man in the world [but also] believed the wealthy were morally obligated to help others” (228).

Beyond the surroundings, the opportunities, and the people, the best thing about Jackie’s life in the lap of luxury isn’t the luxury so much as it is the predictability of a meal schedule, a routine, and a regulated thermostat setting.  Despite her having been through so much, Jackie remains true to her art.

Lest readers think the story is all “happily ever after,” they should be forewarned that it holds plenty of surprises and twists that are true to life and its unpredictability.