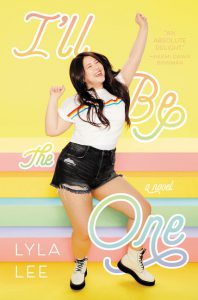 Although she wants to prove a point about Hollywood body standards, Shin Haneul (Skye)—a sixteen-year-old Korean mixed race girl who lives in Orange County—is tired and annoyed.  She’s tired of having to stand up for herself all of the time because she’s a plus-size girl who loves bright colors, loud music, and dancing! And she’s annoyed by her mother’s judgmental nature and by strangers’ perceptions of her weight.  Too often people look quickly and assume: lazy, lack of self-discipline, or no will-power.  Yet, genetics determine body shape more than life habits, and Skye knows she’s no less of a person because of her size.

Skye is brave, talented, and creative—so vocally and rhythmically talented, in fact, that she decides to enter the Korean pop culture sensation (K-Pop),  You’re My Shining Star program auditions (Think American Idol or America’s Got Talent) in both singing and dancing. As a singer, Skye is compared to Adele or Susan Boyle, and as a dancer, Skye favors confident, bold movements and fast, explosive dance.

I’ll Be the One by Lyla Lee takes the reader on Skye’s journey through auditions and the various rounds of competition.  We meet her high school friends (Clarissa and Rebecca) and her competition friends (Lana and Tiffany) as well as learn about her romantic interests (Henry Cho).

Even though Skye doesn’t wish to be a spokesperson for all fat people nor a martyr for the cause, she hopes that her pursuit of her dream will inspire others who also—like her—have been told that fat girls don’t dance.  When she is fat-shamed and bullied by one of the contest judges, she speaks up: “I want to show people that it’s okay to not be model-thin and exhaust yourself to the point of hospitalization.  . . . I want to be my own hero” (28). In situations where the choice is between keeping the peace or calling someone out for their rudeness, Skye considers which will do more harm but will typically speak out.

On the subjects of body positivity and how humans often see and assume without really bothering to look, Lee nails the plot and the point.  However, while I don’t wish to minimize someone else’s experience with weight issues, the redundancy of the fat-shaming, Skye’s mother’s negativity, and the focus on the frequency with which fat characters are used to provide comic relief grows tiresome.  Perhaps, though, that is Lee’s intended purpose.

Skye has a couple of her own epiphanies, as well, about celebrities being more human than god-like and about Henry, whom she thought would be stuck-up and obnoxious because he is a famous model. Actually, Henry is sensitive, considerate, and somewhat shy and insecure.  As it turns out, both Skye and Henry enter the competition for the same reason: to prove to someone that they are more than just their appearance.

Who wins the competition and at what cost and with what repercussions will be the readers’ discovery.