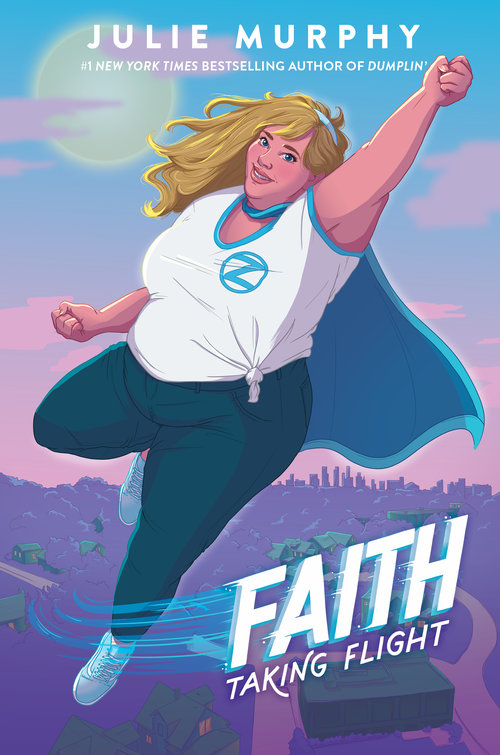 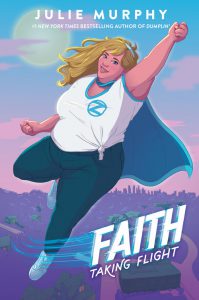 Clever, quick on her feet, and possessing a commanding but cheerful demeanor, Faith Herbert from Glenwood, Minnesota, is destined for superhero status.  Every superhero and character that she loves has endured “some awful thing to achieve greatness” (5), and she wonders whether her parents’ dying in the same car accident when she was quite young wasn’t her “awful thing.”

Now, Faith lives with her Grandma Lou, works at the All Paws on Deck Shelter and Clinic for veterinarian Dr. Bryner tending to people’s pets, and spends a lot of time with her best friends, Matt Delgado and Francesca Palmer (Ches).

Matt has Puerto Rican roots and is unaware of what a catch he is.  Faith loves a good crush, believing “it’s almost as good as the fandom high you ride when you discover a new obsession” (19).  Matt’s family runs a family bakery, Delgado & Sons Bakery, which is famous for their funnel cakes.  More than deep-fried dough, they are a “religious experience” (36), winning prizes for unique flavors like Bananas Foster Nutella.  Both Matt and Faith are pop culture nerds, who are unafraid to love the things they love.

Ches isn’t afraid either, but her passions lean more towards medieval fairy tales, Wiccan culture, and feminist thought, while Matt and Faith gush over the television series, The Grove. The trio of high school seniors complement each other well, and in Faith’s mind, “It’s the perfect mix” (37), with Matt meeting her where she is and Ches—who despises organized religion and the patriarchy—expanding her horizons.

With its semi-spooky setting and its recent sexier and darker topics, The Grove addresses all of the sticky messes required of a good after-school show. It blends the paranormal with superhero lore and the everyday dilemmas of American teens. When the cast and crew move their production set to Glenwood, Faith crushes on one of the actresses, Dakota Ash, who turns out to be not who she portrays.

But Johnny, the editor of the school paper, also has a crush on Faith, who loves to write and who has quite a following for her blog, Faithfully Yours: Your One Stop Fan Blog for Everything Grove.  This love triangle adds depth to Julie Murphy’s novel Faith Taking Flight.  Hanging out with Johnny not only feels natural to Faith but makes her feel valued.

Faith, who loves Wonder Woman, Harry Potter, X-Men, the X-Files, and every other fandom where [she might find] friendship and hope” (60), gets caught up in more than love triangles when feral dogs, homeless people, and high school girls start disappearing and a new drug called A+ shows up at a local prep school.  Something sinister is happening in Glenwood, and Faith decides to use her ability as Zephyr to fly and get involved, even though she’d rather spend midnight ice cream moments with Grandma Lou who is showing signs of dementia.

A year earlier, Faith met Peter Stancheck online, and against her better judgment agreed to an in-person meeting with the “king of weird.” It turns out that Peter is a psiot who works for the Harbinger Foundation, “an underground lab run by a bunch of morally ambiguous people” (117), where he activates Faith’s dormant superhuman abilities.

In Faith Taking Flight, Faith does more than uncover the mystery of who is stealing pets and people.  She proves that a woman’s value is not calculated by the measurement of her waist. Besides supplying validation for plus-size girls, Murphy also includes some key morals in her novel, lessons about how achieving one’s dreams doesn’t always fix problems, about friendship and how it fuels and fulfills us, about living in the present rather than being distracted by the past, and about how being the good guy often doesn’t leave much room for being the best person.