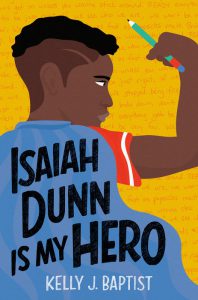 A story of resilience, Isaiah Dunn Is My Hero by Kelly J. Baptist addresses the issue of homelessness from a child’s perspective. The Dunn family’s homelessness is brought on by the death of Isaiah’s and Charlie’s father, Gary Dunn, on November 24 due to a heart attack. Gary’s wife, Lisa subsequently falls into a debilitating depression accompanied by a bout with alcoholism.

While his mother is incapacitated by grief, Isaiah is expected to watch and entertain his four-year-old sister and to keep up in school at Woodson Elementary.  This ten-year-old young man is forced to accept other responsibilities, as well.  Hoping to get the funds for a new place and escape the “Smoky Inn,” Isaiah goes into a partnership with his best friend Sneaky, who operates a candy business.

Between that money and prize winnings that Isaiah hopes to collect after entering one of his dad’s stories in a contest, Isaiah plans to rescue his family.  What he doesn’t know is that his mother hasn’t been paying the motel fees, and soon the family is living in their car.

Realizing that alternative housing will be expensive, Isaiah takes on another job at the local barbershop, where Ms. Rita comes to the family’s rescue.

All of this stress takes its toll on Isaiah, who gets sent to the principal’s office repeatedly and then suspended from school for fighting.  Given the state of his current circumstances, how is he supposed to compose his thoughts on his teacher’s Morning Minute topics regarding his favorite room in his house or how the world is a good and happy place?  It’s a challenge to identify a favorite room when you’re homeless or to write about goodness and happiness when you are being bullied.  And, when Father’s Day arrives, Isaiah wishes he could be somewhere that has no Father’s Day since all of the commercials and stores and other social institutions can do nothing but talk about that which reminds Isaiah of his loss.

As an escape, Isaiah reads his father’s notebooks and imagines super powers to defend himself and to get revenge on bullies like Angel Atkins who pushes him to his boiling point. Not only his imagination but his own father’s stories help to rescue Isaiah from his gloom.  He takes inspiration from the fictional heroes Dad created. Recalling how naming our fears helps us defeat them and how holding our head high enables us to see everything that we are supposed to, Isaiah discovers that he is a rhyming genius and the King of Questions.  Soon, the words that are trapped and swirling inside his head find their way into poems and stories of his own.