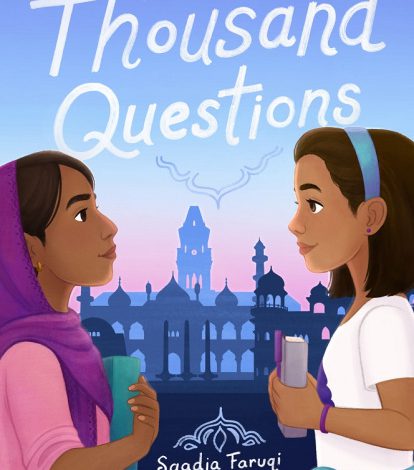 A Thousand Questions by Saadia Faruqi 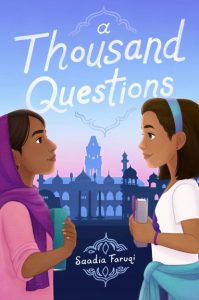 A Thousand Questions by Saadia Faruqi is a story that captures the ideas of belonging and imagination and poverty and richness, with a focus on economic disparity  With her novel, Faruqi also pays homage to Karachi, a city of her own childhood, as she attempts to help readers better understand Pakistan.

To fulfill this objective, Faruqi creates eleven-year-old Mimi, whose father, Tom Scotts, is a journalist who travels a lot for his job. Her mother, Samia, is an art teacher and painter.  Because the couple has grown apart and decide to separate, Mimi, who is about to enter sixth grade in Houston, feels abandoned and incomplete. When her mother decides a trip to Pakistan is in order so that Mimi can get to know her grandparents, Mimi is prepared to despise the Land of the Pure. Initially, it is pure dust, haze, and heat, but gradually, her negative attitude melts.  With the help of Sakina Ejaz, a servant girl in her “pretentious” grandparents’ home, Mimi begins to see beauty in this unfamiliar place.

In Pakistan, Mimi’s eyes literally pop: “It’s all so strange, but also weirdly cool and bright, an explosion of color so sharp it reaches inside me and draws out a little sigh” (6).  To capture all of the newness, Mimi records her thoughts in a journal, creating entries in the form of letters to her absent father: “I know it’s silly to write to a father who left me, who doesn’t ever call or visit me. There’s not even a small chance that he’ll ever read the journal, but maybe that’s why I like writing in it. I can say whatever is in my heart, ask a thousand questions, without any fear of being laughed at” (61).

With Sakina as her tour guide, Mimi experiences rickshaw and camel rides, visibts Clifton Beach and the mausoleum of Quaid-e-Azam, thefounder of Pakistan. Sakina introduces her to pomegranate juice, mangoes, and a variety of ethnic cuisine: roti, bun kabab, naan, biryani, and tikka boti—a dish Abba prepares using a grilling technique that involves using a hot coal put into a pot of meat when it is almost cooked. “The taste of the grill without the hassle” (101), he says.

Readers get other cultural lessons in the discussion of Eid gifts, calls to prayer (azaan), political practices, and garments worn: dupatta, shalwar, and kameez. From Sakina’s abba, we learn that the poor are made silent by their troubles and that it is futile to get angry about things we cannot change.

Still, as the two young protagonists exchange experiences and share time together, readers realize that impossible and unbelievable things can happen. Faruqi further enlightens readers with a creative metaphor using chess and with another definition of freedom and. Freedom, Nani agrees, is often beyond the reach of the poor. “Money gives you freedom in some ways, but to be truly free, you need other things. Good friends. Family. Yor children around you” (254). Just as chess is a game of strategy and patience—something servants have little time for. Sakina explains, “We spend our days putting out fires, answering others’ beck and call, and generally running around worrying how things will get done. Who has toime for a long, drawn-out chess match, where the goal is to protect the queen and sacrifice the pawn? It seems too close to real life to be any fun” (108).

2020-10-07
Previous Post: Dimension Why: How to Save the Universe without Really Trying by John Cusick
Next Post: Punching the Air by Ibi Zoboi and Yusef Salaam