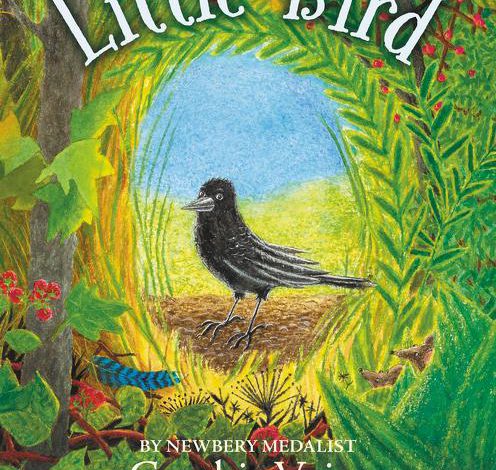 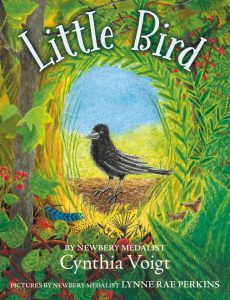 Although Cynthia Voigt’s newest book, Little Bird, has a target audience of middle-grade readers, with its anthropomorphism, it joins beast fables like Monkey Wars by Richard Kurti and Watership Down by Richard Adams, adding its own brand of commentary on human societies and behaviors.

The title character, Little Bird belongs to a small flock of crows who forage, guard against danger, and live out their short lives near Old Davis Farm. However, Little Bird doesn’t have the sharp-beaked, sharp-clawed, and sharp-spoken way of other crows. She discovers additional differences between herself and other crows, when the flock loses a good luck charm called Our Luck, which they had woven into a fledgling nest.

The fisher, a fast climbing, fierce, deadly predator, attacks the nest and steals Our Luck. Because no other member of the crow flock can be spared to go search for Our Luck, Little Bird volunteers so that their flock isn’t left to “become no better than other birds, dependent on weather and happenstance, with only [their] strength and wits to guard [them] (21-22).

On her search journey, Little Bird meets jays that call crows “dead-flesh eaters” and try to derail her search, she confides in a goat named Brutus, seeks answers from a squirrel named Toaff, and visits with raccoons. Picking up wisdom through observation, she studies humans, turkeys, sheep, cows, and a fox.

From Brutus, Little Bird realizes that questions and diverse perspective are critical to learning. Brutus shares further wisdom and insight about the detriment of generalizing when Little Bird refers to him as ordinary.  Brutus tells Little Bird, “I am both like and unlike other goats. As all creatures are like and unlike others of their kind. Ordinary is a slippery word when applied to creatures.  Take yourself. Are you an ordinary crow?” (28).

Through a series of questions and answers, Brutus leads Little Bird to realize that creatures can tell very little about one another just by looking or assuming. “Life is more interesting—and easier too—when you can understand what others say” (33) and when you respect their experiences and perspectives and listen to their thoughts, Brutus tells her. Because he is knowledgeable and shares useful information with Little Bird, she enjoys discussing and learning from Brutus. She also realizes that what she thought was true, because Kakaawl, the lead crow, said it was so, isn’t factual.  She also must unlearn that crows possess a superior intellect and do not have the ability for laughter.

With all of the creatures she encounters and all of the knowledge she acquires by listening, Little Bird isn’t sure she wants to return to her roosting place in the oak and rejoin her flock.  She doesn’t feel a sense of belonging with crows that don’t even know they can laugh. “The oak no longer had enough room for a crow who liked to listen and understand and do what she chose, not what she was told” (180).

As Little Bird’s quest continues, she comes to understand trickery, cruelty, and ignorance. She not only uncovers the truth about Our Luck but discovers liars and Longsticks and almost loses her courage in her desire to escape the bad things in life. Still, she knows that life is full of questions and that learning and thinking about new things and adding perspectives, as well as thinking about the things she already knows, will enrich her life. Overwhelmed by uncertainly, Little Bird ultimately discerns that we choose for ourselves, not others, and that others can’t make choices for us, either.

2020-10-20
Previous Post: Punching the Air by Ibi Zoboi and Yusef Salaam
Next Post: The Bridge by Bill Konigsberg