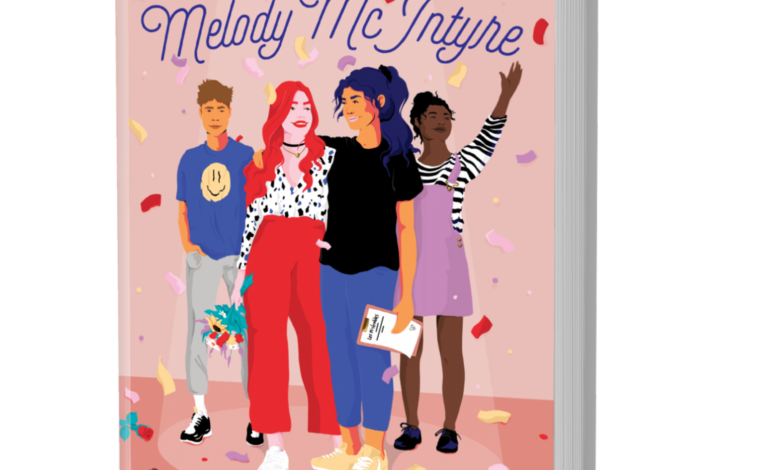 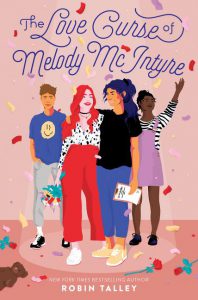 Fans of Francina Simone’s novel Smash It! will likely also enjoy Robin Talley’s The Love Curse of Melody McIntyre. Both are written with “theater kids” in mind and with the message that nothing is perfect. Talley’s protagonist is cue-calling master Melody McIntyre who has her sights set on Broadway.  Mel has worked her way into the position of Stage Manager at Beaconville High School (BHS) in Massachusetts. Renowned for its theater program, BHS productions have not only won statewide awards but many of the program’s alumni have gone on to careers in the performing arts, both as actors and in technical roles.

Mel is a self-proclaimed drama geek who dates the incredibly talented and hilarious Rachel Scott, who ultimately breaks up with her in the middle of Romeo and Juliet. Because the messiness of the breakup creates some mayhem for the theater, the crew decide that many of the mishaps in their cursed theater may be triggered by Mel’s dating practices and love life.  Given the correlation, the superstitious group takes drastic measures and imposes a “no showmance” for Mel.

A sexually fluid gal, Mel oscillates from incensed to embarrassed but finally agrees that her relationships during shows have a definite tendency toward drama, and since she doesn’t “have to be dating someone in order to survive” (43), she agrees to the ban. Because she wants the spring musical Les Misérables to “go perfectly” and because it’s her job to keep everyone safe and to maintain the crew’s trust, she vows to the no dating, no falling in love rule.

Of course, at the time of the vow, she didn’t plan on meeting the girl of her dreams, Odile Rose, a vocally gifted, “up and coming teen ingénue . . . [who is] going to walk every red carpet in Hollywood someday” (63). At first, Mel admires from a distance and finds herself flustered and tongue-tied around Odile. Soon, the perfectly-put-together Odile forgets to put on her act around Mel, allowing “the real Odile” to emerge, the one with actual fears and vulnerabilities and tear ducts” (209).

After several random and eventually orchestrated encounters, Mel’s feelings shift. She knows “something is going on here” (201), something “thrilling and frightening at the same time” (201) that she doesn’t have a name for.

Mel can’t confide in her best friend, whom she also once dated, because Dominic Conner is a member of her crew from whom her matters of the heart must remain secret. When Dominic crosses the line to become an actor, Mel is shocked since Dom has always said that percussion owns his soul. Now, he has decided that “singing can have half of it” (163).

Because Mel doesn’t hold back when she’s passionate, she learns the code to Odile’s smiles. As much as she tries to play it cool and to follow the rules, they fly away in the mischievous Odile’s presence.

How will Mel navigate this potential chance at romance given her promise to the crew and her desire to keep the curse in check? Will she have to rip the heart out of her chest and stomp on it to get the success she has always dreamed of?

Besides the artfully drawn characters immersed in their discourse community of theater, Talley draws the reader’s attention to some key morals. For one, we can enrich our social circles by cross-socializing more, rather than revolving in cliques and not making an effort to understand one another’s differences and perspectives. For example, Mel learns that there’s more to “Nick the Dick” than what she reads as arrogance.

In addition, through Odile, the reader learns that sexual orientation shouldn’t have to be “some dramatic development, when really, it’s just part of life” (282). We also gain insight about love as both a gift and a curse and experience what happens when trust is broken.

However, the best reminder might be that “there’s no such thing as a perfect performance and that we should just aim to put on something we feel really good about” (407). The trick is to remember that failure/mistake making is the fuel of learning and that trying to be perfect is our enemy since perfection is an ideal, not reality.