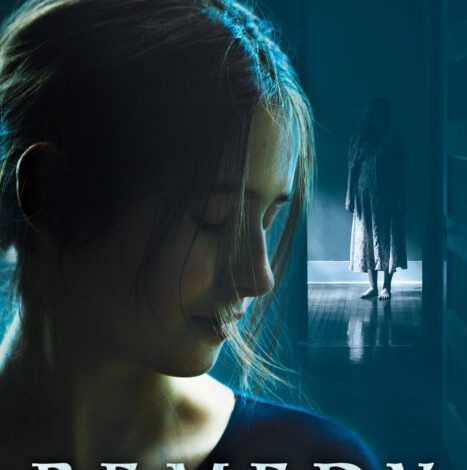 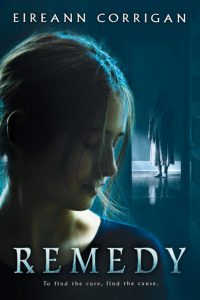 Since I had recently watched an episode of Dr. Phil in which an individual was being treated for the condition which forms the underlying conflict in Remedy by Eireann Corrigan, I guessed the mysterious illness early on. Because Corrigan’s protagonist, Cara Jean Wakely couldn’t exactly articulate her current ailment and stated that she and her mother Shaylene moved around a lot, those details tipped me off. However, the reader doesn’t learn the secret until much later when Cara’s friend Xavier Barnes (aka Science Kid) plants the idea in her brain. Xavier, who lectures and sometimes drones and laughs at his own jokes, loves gathering data and drawing conclusions.

Until that discovery, Cara is exhausted by how hard she has to work to be cheerful and alert. Afflicted with Unidentified Autoimmune Syndrome, she exists in a cocoon knit from the concern of others. That fact forms the silver lining of her sickness since it gives people a reason to flex their compassion muscles.

Cara’s mother, who was an accomplished skater until she was forced to give up the sport due to injury, had to eventually sacrifice her own nursing career as well to become Cara’s full-time caregiver. With her medical background and training, Shaylene hopes to unlock the code that has Cara’s health in its strongbox. To keep herself somewhat connected to her profession—as well as to generate concern for Cara—Shaylene posts frequently to a video log she calls Wellness Warriors.  To keep Mama happy and to assuage her guilt, Cara plays along and takes her pills without questioning but feels like her dignity has been sold for donations.

A ninth grader in Ohio, Cara moves around in a pharmaceutical fog and feels smothered by her mother’s miracle cures. Cara’s baby album looks like a medical scrapbook, and she’s aware that she and her mother always talk about methods for managing her symptom or ways to prevent the fatigue, headaches, and pain from worsening. “It’s like we can’t even conceive of a scenario in which I am totally well” (72).

When Cara collapses during midterms at school, her mother talks about lawsuits and homeschooling. However, since Cara already feels closed off from the outside world and needs a chance to breathe, to venture into the world of the healthy, and to form connections, she refuses to consider homeschooling an option. Instead, Xavier, who needs community service hours in order to qualify for National Honor Society membership, agrees to tutor her.

Xavier, it turns out, understands almost everything from quadratic equations and science topics like mitosis and meiosis to such terms as iambic pentameter and dramatic irony. “Working with Xavier is like watching the Jeopardy! Tournament of Champions except the only person winning any Daily Doubles is a skinny black kid who gnaws on the eraser end of his pencil and phrases everything in the form of an answer” (119).  Xavier has sickle cell anemia, and since the two young teens share uncertain tomorrows, they form a bond.

Another connection Cara forms is that with Manuela, the woman who owns Mud Matters, a clay studio. Cara finds that working with clay helps to ease her stress, as well as provide an outlet for creativity where she can coax a shape into being.  From Manuela, who encourages her to put her unspoken emotions into art, Cara learns some life lessons, such as: “Everything you put out into the world comes back to you” (92). From Manuela’s role modeling and how some people move through the world and make their whole existence a gift to others, Cara vows to be one of those people as soon as she feels well enough. Art helps her to channel her inner lion.

While reading this book, I spent a lot of time feeling quite angry that such situations like those explored in Corrigan’s novel exist in the world, but the sparks of light that come from characters like Manuela, Xavier, and Pat Neary are uplifting and hopeful. From Mr. Neary, Cara learns there is a distinction between sickness and heartsickness. “The remedy is different. The remedy for heartsickness is connection. . . . Keep connecting, Miss Cara Wakely. You will heal more than yourself that way” (314).

Fans of true crime will likely find this book both creepy and thrilling.

2021-05-24
Previous Post: The Marvelous Mirza Girls by Sheba Karim
Next Post: Where the Rhythm Takes You by Sarah Dass